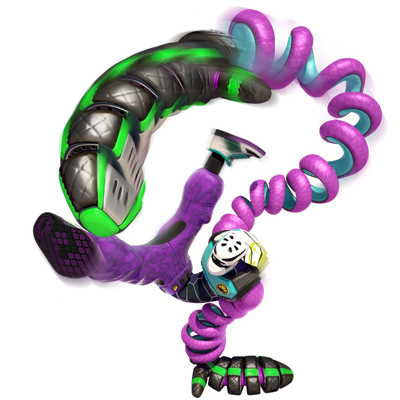 Kid Cobra is a playable character in ARMS. He is a professional snakeboarder and live streamer, as well as one of the rare inheritors of ARMS, the ability to stretch his limbs to greater ranges. His ARMS are also scaly and serpentine like, as well as having heterochromia. Kid Cobra is one of the few people who had his extendable ARMS since birth, which is very rare and occurs to 1 in 100,000 people.

He has entered the Grand Prix in order to get more hits and followers online. Due to the fact that he always wears a mask and his race hasn't been confirmed yet, it makes Kid Cobra an interesting surveying target.

Speed: At least Subsonic (One of the fastest ARMS fighters, Able to dash the fastest as well as dodge ARMS mid-dash), most likely higher

Lifting Strength: Class 1 (Can wield and fight with heavyweight ARMS)

Slamamander: Medium-weight ARMS that are long and flexible, like whips. When shot out, they are able to whip across a widespread area.

Hydra: Light-weight ARMS that are able to shoot out 3 missiles in a vertical stack. These missiles when charged are ignited on fire, able to burn opponents hit by them

Coolerang: Medium-weight ARMS in the form of a boomerang. When shot out, the boomerang is able to curve out and retreat back to Kid Cobra. They are able to freeze any opponents hit by them temporarily.

Special Ability: Dash Dodge: When Kid Cobra has charged his ARMS, whenever he dashes, he will be able to duck under any attacks thrown at him. His dashes are also much faster, and go further than the other ARMS Fighters.

Rush: A technique every ARMS fighter knows, that allows them to temporarily increase the speed and power of their attacks after charging for a few seconds.

Retrieved from "https://vsbattles.fandom.com/wiki/Kid_Cobra?oldid=5051416"
Community content is available under CC-BY-SA unless otherwise noted.