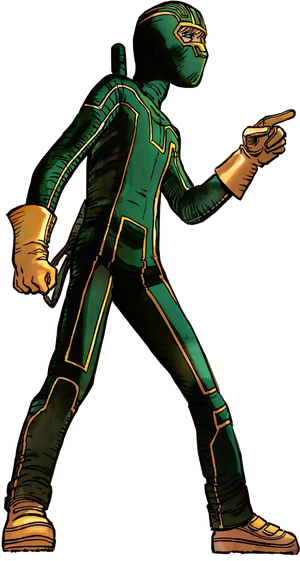 Dave Lizewski, better known as Kick-Ass, the main protagonist of the comic book series of the same name. As Normal Guy Dave lived in New York with his father where nothing really happened. However, one day Dave decided to take his interest in comic books and become a real-life superhero . He assembled a wet suit he got off the internet, began a little warm up and began to fight crime... Only to get a hit by a car.

Luckily, Dave miraculously survives and was released several weeks later with only a few metal plates on his bones and some damaged nerve endings (which made him nigh immune to normal beatdowns).

Though he failed at his first attempt at being hero at first he ends up back on the streets once more. When he saves a man who was being attacked by thugs, several onlookers filmed his rescue making Dave a sensation overnight. He was dubbed to the public as... Kick-Ass.

Attack Potency: Street level (Can fight police officers who are comparable to punching a hole through a door)

Durability: Street level (Survived being hit by a car before he got his metal plates, and has survived several beatdowns and torture and still got up)

Stamina: Higher than normal (Damaged nerves make him immune to most injuries due not being able to feel certain amounts of pain, so he can keep fighting for longer periods of time)

Standard Equipment: Batons (They're most likely broken mop handles painted green and have duct tape tied to them) (Dave also upgraded the Batons to have spikes in the comics)

Weaknesses: Even though Dave is a hero, he's still a human and has normal human weaknesses. Only received 6 months of training from Hit-Girl so he has little fighting experience. Can fight two people with ease but can be overpowered if outnumbered by large groups.