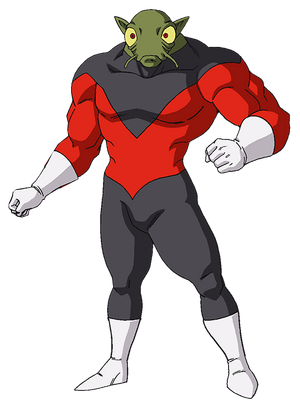 Kettol (ケットル Kettoru) is a member of the Pride Troopers who participates in the Tournament of Power.

Powers and Abilities: Superhuman Physical Characteristics, Acrobatics, Ki Manipulation (Can be used defensively and offensively, to strengthen his skin or to fire ki blasts, which can home in on targets, and form defensive barriers), Martial Arts, Flight, Spaceflight, Self-Sustenance (Type 1), Telekinesis (Was able to move energy spheres and manipulate them across the air without even moving), Resistance to Extreme Cold and Cosmic Radiations

Attack Potency: Large Star level (Matched Shosa in combat at the start of the Tournament of Power, was capable of damaging Base Caulifla and helped other Pride Troopers against Super Saiyan Kale and Caulifla, should be comparable to Cocotte)

Speed: At least FTL+ via Powerscaling (Should be comparable to the other Pride Troopers that used the united Justice Stream against Kale, dodged Caulifla multiple times, also pissing her off which made her go harder)

Durability: Large Star level (Shown no fatal wounds after being blasted off the Stage by Kale)

Range: Standard melee range, Stellar with Ki Attacks (Showered the Tournament of Power with numerous of his Ki attacks)

Kettol about to damage Caulifla.
Add a photo to this gallery