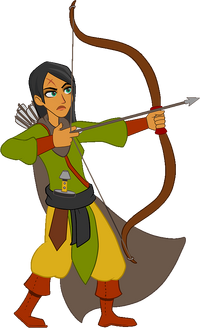 Speed: Likely Peak Human travel speed, at least Superhuman combat and reaction speeds (Should be faster than Markos who can attack this quickly, dodges attacks from revenant who can dodge the party's attacks) with Subsonic attacks (Shoots arrows this quickly)

Durability: Street level (Should be comparable to revenant who she trades blows with)

Intelligence: Average, lacks an education and is an illiterate, but is an expert in Nomadic sayings, as well as Nomadic and Geka traditions

Retrieved from "https://vsbattles.fandom.com/wiki/Ketta_Takili_en_Geka?oldid=4344329"
Community content is available under CC-BY-SA unless otherwise noted.