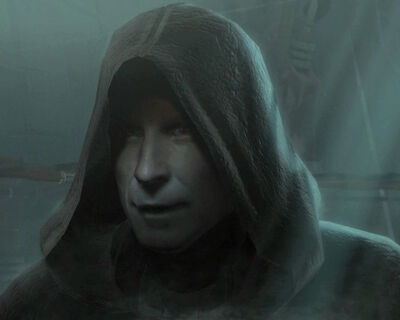 Kento was a Jedi Knight of the Jedi Order. Upon the outbreak of the Clone Wars, he fought on the side of the Galactic Republic alongside his fellow Jedi. Commissioned as a Jedi officer like the rest of the Order's members, Marek eagerly led clone troopers into battle on many fronts. As common with the younger generations of the Jedi Order, Marek craved excitement, adventure and the opportunity to perform many heroic acts as a warrior. However, he fell in love with a fellow Jedi named Mallie and the two decided to get married and leave the Jedi Order. They would later settle down on Kashyyk, where they would have a son named Galen and Mallie would die while protecting native Wookiees from slavers. Kento himself would later meet his end at the hands of Sith Lord Darth Vader while protecting his son Galen, who would later become Vader's Secret Apprentice.

Attack Potency: Planet level (Capable of holding his own for a short time against a pre A New Hope Darth Vader)

Lifting Strength: Peak Human, can be augmented to Superhuman Levels thanks to Force Amplification

Striking Strength: Planet Class with Force Amplification (Capable of matching Darth Vader in melee combat for a while; only being overpowered due to Vader's skill with Form II overcoming his own Form I, which is specifically weak against Form II)

Stamina: High. Though injured, he was still alive after a brutal telekinetic assault from Vader and would have recovered with medical treatment. Force wielders in the same league as him can continue fighting for extended periods with Force augmentation despite severe injuries.

Intelligence: Gifted. Skilled and dangerous combatant. Cunning enough to evade detection from the Jedi Order for years and from the Galactic Empire for over a year; only being detected by Vader due to him participating in the defense of Kashyyyk. Transcended the material realm and became a spirit, indicating tremendous wisdom and knowledge of the ways of the Force.

Retrieved from "https://vsbattles.fandom.com/wiki/Kento_Marek?oldid=5399125"
Community content is available under CC-BY-SA unless otherwise noted.