Kenshiro is the protagonist of the Hokuto no Ken franchise, the 64th successor of the Hokuto Shinken style of martial arts, and the greatest of all of them in its 1,800 years. Originally an orphan from Taiseiden, Asura, and a descendant of the Hokuto Sōke bloodline, he was sent to the mainland as a baby with his adoptive siblings Raoh and Toki. He was adopted by Ryuken and named after his uncle. Although younger and more passive than his brothers, he was still named Ryuken's successor after Toki became gravely ill. Soon after, he was attacked by his rival Shin, separated from his fiancé Yuria, and left to die in the desert, with the Big Dipper stabbed into his chest. However, he survived. From that day, he was no longer the gentle, passive man of the past, and went on to become the savior of the wasteland.

Origin: Fist of the North Star

Superhuman Physical Characteristics, Regeneration (Low-Mid; has regenerated his flesh, bones, crushed organs, and eyes), Enhanced Senses (His smelling is as good as a hound's, he can hear someone whispering from two kilometers away, can see the aura of a living being in pitch black darkness, and should be able to identify poisons by smell like his uncle), Martial Arts (Is a master of Hokuto Shinken, which allows him to target and hit someone's pressure points for various purposes; ranging from causing them to explode to manipulating their movements to healing them), Status Effect Inducement (Can accomplish this with numerous Hokuto Shinken techniques), Statistics Reduction (Can reduce an opponents statistics with numerous Hokuto Shinken techniques), Weapon Mastery (Has shown the ability to skillfully use weapons such as spears, nunchucks, and a 6 sectioned staff), limited Self-Sustenance (types 2 and 3; can go three months without eating and one week without sleeping), Chi Manipulation, Aura (Possesses a fighting aura that protects him and can absorb energy attacks), Biological Manipulation (Gave a mute girl the power to speak and a blind woman sight. Can use his fighting aura to strike a man's heart and also disrupt his blood vessels), Death Manipulation (Can inflict death by pressing a person's pressure points), Empathic Manipulation (Can use his aura to pacify rampaging enemies), Possibly Matter Manipulation (His uncle showed signs of this ability), Memory Manipulation (Some of his techniques allow him to change or erase the memories of victims), Mind Control (Can manipulate someone's movements, force them to obey his orders against their will, and make them confess their secrets by pressing their pressure points), Sleep Manipulation (Can put people to sleep with by pressing their pressure points), Duplication (Can create several dozen Ki clones), Fear Inducement (Can use his aura to strike fear into his enemies, even if they hold an advantage over him in strength, his aura frightened Kaioh's evil ki back into his body, which left him so weak that a single stone could knock him down, his perfected Muso Tensei made Raoh lose his focus, should scale to his uncle), Reactive Power Level (Has shown to be able to adapt to his opponents level of power, was stated to become stronger according to his opponent, should scale to Shachi, who could adapt to Han's speed just by watching him and Kenshiro fight, even though he previously couldn't see Han's fist attack him), Limited Flight (Numerous ki users have been able to use their ki to float/glide/levitate, should be able to use Souther's techniques), Instinctive Reaction (Hokuto Shinken possesses a technique that counters a technique that focuses on dodging attacks via subconscious reflexes, Musō Tensei is described as using a blank mind), Precognition (Receives visions of other fighters attacks, warning him of what will happen. Can also anticipate the attacks of those who enter his aura, along with being able to read the aura of others to predict their movements), Telekinesis, Limited Spatial Manipulation via Anryū Tenha (Can bend space around himself to avoid attacks or distort space around an opponent to disorient them and trap them in a weightless space), Stealth Mastery (Can suppress his aura to sneak up on people), Power Mimicry (Can copy the martial arts styles of others after seeing them once, which includes the abilities of that martial art), Air Manipulation (Can slice opponents apart with air pressure with Nanto Seiken), Can cut through people on a cellular level with Gento Kō Ken, Ice Manipulation (Can shoot ice out of his hands using a Gento Kō Ken technique), Power Nullification (Can nullify energy-based attacks and up to Low-Mid regenerative capabilities), Intangibility and Existence Erasure with Musō Tensei (Musō Tensei is made up of nothingness, rendering Kenshiro intangible, and allows him to erase others from existence. It also prevents him from being erased as well, however it will bypass his intangibility), Can communicate with the dead with Musō Tensei, Can harm souls (Should scale to his uncle), Astral Projection (Can fight just as his soul), Likely Pocket Reality Manipulation and Power Nullification with Sōryū Tenra (As the successor of Hokuto Shinken, he likely learned how to use Sōryū Tenra, the ultimate technique passed down to the successor; transports him and his opponent to a world of nothingness where all barriers and defenses are removed, leaving only a fight to death with nothing but one's bare hands)

Resistance to the following: Poisons (Can endure 5 times the lethal dose of potassium cyanide. Also resist paralytic gas and even stated to be resistant to all natural poisons), Heat and Fire (Has tanked fire from a barrage of flamethrowers and touched lava with his bare hands), Electricity (Shrugged off an electricity gate that would have burned a human to a crisp), Chi Draining (After interacting with the Hokuto Soke stone, he learned how to keep Kaioh from draining his ki), Precognition/Clairvoyance (Users of the Hokuto arts can bend their fates as they choose, making it difficult to read their destinies), and Mind Manipulation (Easily resisted a mind control attack from Geira)

Same as before, Summoning (As the successor of Hokuto Shinken, and having interacted with the Hokuto goddess statue, Ken can most likely summon the guardian goddess of Hokuto – either her whole person or just her hand – to attack someone and take away their fighting aura, and she can also prevent Ken from making poor decisions in battle, similar to his uncle)

Attack Potency: Small Country level (Could easily injure Jagi without powering up), higher with Tenryū Kokyū Hō (Easily stomped Jagi while using 100% of strength, contended with and defeated Raoh, who performed this feat while low on energy and half-dead) | At least Small Country level+ (After lifting the seals of the original Hokuto, he became strong enough to match Kaioh, who easily stomped his previous 100% and people comparable to his previous 100% while in Base), likely Country level with Tenryū Kokyū Hō (Matched and eventually defeat Kaioh, who had went 100% Mode in their final fight). He can ignore conventional durability with most of his attacks

Lifting Strength: At least Class K (He lifted a special rock that was calculated at 300 tons and did this in base and without powering up)

Stamina: Extremely high (Kenshiro can go without food and water much longer than an average human. The Databook, "All about the man" states he can remain strong even if he goes three months without eating. He can recover very quickly, even during a battle after being severely wounded from having his muscles and bones sliced or crushed, and can cross distances across the desert on foot, which would require normal people to use cars or other vehicles to cross. He can also recover instantly from any major wounds given, and regain his stamina (even when his body was exposed to deadly sulfuric gas). Has much better stamina than the likes of Rei and Souther)

Standard Equipment: A pair of Nunchucks

Intelligence: Gifted (Kenshiro is a master of martial arts and possesses extreme precision and skill. He is precise and accurate enough to strike a pressure point as small as the tip of a pin with a strand of hair. His memory is refined to the point that he's able to memorize up to 50,000 words after reading them once. His technique and grace are unrivaled, and he has mastered all of Hokuto Shinken's techniques, as well as the techniques of many other schools, such as Nanto Seiken)

Weaknesses: If one can attack with nothingness (i.e any void based attack), it can bypass his intangibility with Museo Tensei

Hokuto Shinken: Hokuto Shinken is a 1,800-year-old Chinese martial art based around assassination and passed on only from teacher to student. Its power is based around targeting and hitting the 708 Keiraku Hikō (or pressure points) in an opponent's body, channeling energy into them, and through that, manipulating their movements. These pressure points can be used to control an enemy's body, in ways such as forcing them to move or destroying them from the inside with an explosion, or they can be used for healing, such as in the restoration of someone's memories, eyesight, or voice.

Kenshiro is the 64th successor of Hokuto Shinken, a master of the art who has knowledge of every signal technique. Through Musō Tensei and Suieishin, Kenshiro should have access to the martial arts and techniques of all his rivals, from Rei to Kaioh, and as the 64th and greatest successor to Hokuto Shinken, he should know all of its techniques. He can even use the unique forms of Hokuto Shinken used by his older siblings. His mastery of it spreads even to its original form, Hokuto Sōke no Ken.

Keiraku Hikō: The pressure points Kenshiro can hit and their effects include;

Nanto Seiken: The opposite martial art to Hokuto Shinken. While Hokuto Shinken revolves around destroying an opponent from the inside, Nanto Seiken revolves around destroying them from the outside, slashing and stabbing to create waves of air pressure that slice opponents apart. Having fought several of the Nanto Rokusei Ken, Kenshiro has assimilated their fighting styles into his own through Suieishin and Musō Tensei.

Gento Kō Ken: A style created to protect the Heavenly Emperor. It focuses on the use of ki in combat, using it in blasts and to cut through opponents on a cellular level. Due to his fight with Falco, Kenshiro should have assimilated this into his fighting style. 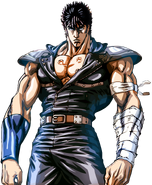 Superman (Injustice) Superman's Profile (Seals Lifted Kenshiro was pit against Base Superman, and speeds were equalized)

Start a Discussion Discussions about Kenshiro (Hokuto no Ken)