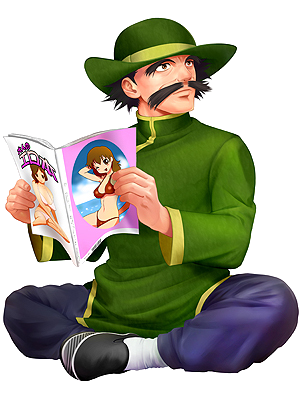 Kensei Ma is the lecherous master of all Chinese Kenpo, though he prefers to fight using soft forms. He was the head master and leader of the chinese organization, the Phoenix Alliance, but has since gave up his postition and moved to Japan. He is currently the second oldest of the six masters of Ryozanpaku.

Classification: Martial Artist, The Master of All Chinese Kenpo

Attack Potency: City-Block level (As a master of Ryozanpaku, he should be on same rank with Akisame Koetsuji)

Speed: At least Supersonic, likely higher (Much faster than Kenichi)

Durability: City-Block level (Has taken blows from other Master-class fighters.)

Stamina: Very high (Able to fight numerous of enemies while show to have a little of tiredness)

Standard Equipment: A bunch of needles, which he usually uses for Chinese medicine.

Intelligence: Kensei is a very studious individual, which make him able to quickly determine a person's battle style after a single glance. He is also a highly skilled and knowledgeable medical expert. Using various ancient techniques, he can easily sooth away pain from most injuries. With his knowledge of the human body, he can easily target its various pressure and ki points with needles to control its natural functions, even produce temporary paralysis or unconsciousness. He is also very capable in herbal remedies.

Weaknesses: He has been shown repeatedly throughout the series as a very active pervert. Whenever he fights a female opponent, he prefers to ties them up with their own clothes to leaving them basically naked. He is also proven to be very persistent.

Retrieved from "https://vsbattles.fandom.com/wiki/Kensei_Ma?oldid=4116540"
Community content is available under CC-BY-SA unless otherwise noted.