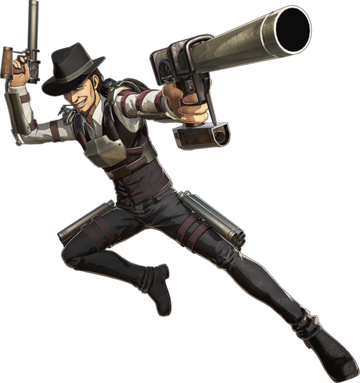 Kenny Ackerman was a member of the Military Police Brigade's First Interior Squad and the captain of the Anti-Personnel Control Squad. Kenny was a vicious killer who would his slit his victim's throat. He was so proficient at not getting caught that he was considered by some to be an urban legend known as Kenny the Ripper. After meeting and befriending Uri Reiss, he worked for the crown, but secretly desired the "God-like power" that the Reiss family had possessed for himself. He was the maternal uncle of Levi Ackerman and had taught the latter as a child on how to survive the Underground.

Attack Potency: Wall level (Capable of taking out over a hundred members of the Military Police), Building level with equipment (Levi was highly uneasy at the possibility of facing him despite going head-on against Titans on a recurring basis)

Speed: Peak Human, Subsonic with the Anti-Personnel Vertical Maneuvering Equipment (Able to scale buildings at incredible speeds and assault his targets before they can react) with Supersonic reactions and combat speed

Stamina: High. Even though he's a middle-aged man, he's quite agile and didn't show any exhaustion when he chased Levi.

Intelligence: Very high. Kenny was a Serial Killer who was so good at killing that he was able to kill over a hundred members of the Military Police without getting caught. On top of that, he was the leader of the First Interior Squad, showing high-leadership skills. Levi mentioned that he learnt quite a bit from him concerning how to out-maneuver his targets, suggesting that Kenny was highly intelligent and a strategic thinker. He's also very analytical, even outmaneuvering and tricking Humanity's best soldier into walking into a trap. When Levi faced Kenny, he stated that Kenny can read every move of him. The fact that he was able to teach an individual as skilled as Levi suggests that he was an adept teacher.

Younger Kenny.
Add a photo to this gallery