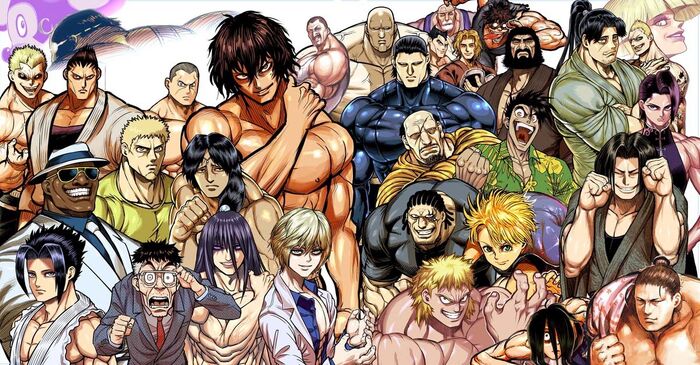 Kengan Ashura is a Japanese manga series written by Yabako Sandrovich and illustrated by Daromeon. The story features the main protagonist, Tokita Ohma, in his quest to prove himself the strongest fighter in the world, enlisting as a fighter in the Kengan Association, an underground fighting ring used to settle disputes among powerful businesses across Japan.

There is currently an ongoing sequel known as "Kengan Omega", featuring a new protagonist, Narushima Koga.

In terms of physical strength, every major notable fighter in the series is capable of superhuman feats such as breaking concrete with their blows and throws. High-tiers are capable of dishing out and tanking blows that can easily destroy boulders and rend steel, while top-tiers can tank blows that can one-shot most mid- to high-tier fighters. God-tiers can produce explosions that fell trees at their peak.

In terms of speed, all notable fighters are able to react to, if not move at speeds that allow them to disappear from eyesight. High-tiers are able to react to supersonic speeds while top-tier combatants such as Tokita Niko and Kuroki Gensai are capable of reacting to and defending against modern firearms. Speed specialists such as Mikazuchi Rei are capable of reaching speeds that allow him to disappear from the trained eyesights of even top-tier fighters such as Kuroki Gensai and Kanoh Agito; the latter of which was viewing from an elevated point of view.

Fist of the Seeker