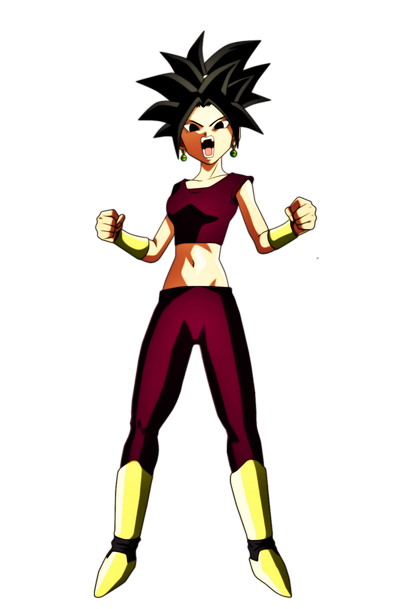 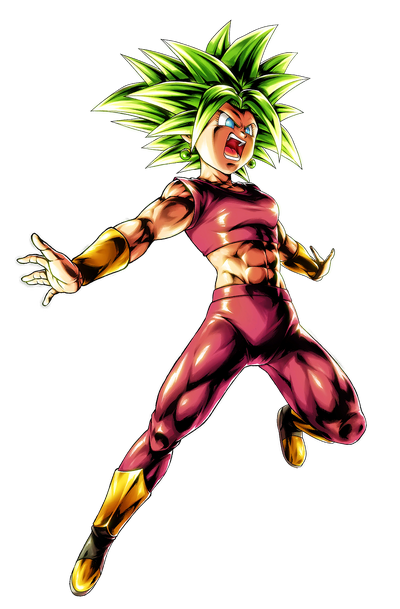 Kefla is the Potara fusion between Caulifla and Kale, and is the secret weapon of Universe 6 in a last-ditch attempt to win the Tournament of Power, forming after the two were almost eliminated by Goku.

Powers and Abilities: Superhuman Physical Characteristics, Acrobatics, Martial Arts Mastery, Flight, Ki Manipulation (Can be used defensively and offensively, to strengthen his skin or to fire ki blasts, which can home in on targets, and form defensive barriers), Ki Sensing (Can locate others by reading their ki), Enhanced Senses (Saiyans have exceptional senses, allowing Kefla locate small, distant objects by tracking their smell, see clearly over long distances, and track the movements of others even in pitch black conditions by feeling vibrations in the air), Reactive Power Level (As a Saiyan, Kefla grows stronger every time she fights and can become stronger in the midst of combat, vastly increasing in strength whenever she is mortally injured), Shockwaves Generation, Rage Power, Berserk Mode, Danmaku, Transformation (Can transform into a Super Saiyan + Berserk, increasing her capabilities drastically), Sound Manipulation, Can possibly create dimensional rifts and destroy space-time and pocket dimensions with her energy via powerscaling, Resistance to Cold and Radiations

Attack Potency: Universe level (Sent Universe Survival Saga Super Saiyan God Goku, who could contend with Dyspo, flying with a single punch. Noted to contain the combined total power of Caulifla and Kale, multiplied by "tens of times," as mentioned by Vados) | Universe level (As a Super Saiyan, she forced a Super Saiyan Blue Goku who had broken his limits to use the Kaio-ken, and defeated him with a surprise attack to the head. Later, this form was described by Whis as acting as a catalyst similar to the SSB Kaio-ken x20 Spirit Bomb, which had served as the original basis for Goku's awakening of Ultra Instinct) | Universe level+ (When fighting vs Ultra Instinct Goku, a confident Super Saiyan 2 Kefla stated she could "blow away an entire universe in one shot", and Piccolo commented that her power had surpassed the level that Goku had previously reached when fighting Jiren. At her absolute maximum strength, it was stated that not even a more adept UI Goku would have been capable of surviving one of her blasts, although he was able to effortlessly dodge each of her attacks)

Stamina: Unknown. At least very high (Can fight for an hour before defusing. Goku commented that her power was "massive," and had "no limit," and Kefla herself noted that she sensed, "infinite power," bubbling from within her)

Weaknesses: The fusion time limit, her own overconfidence