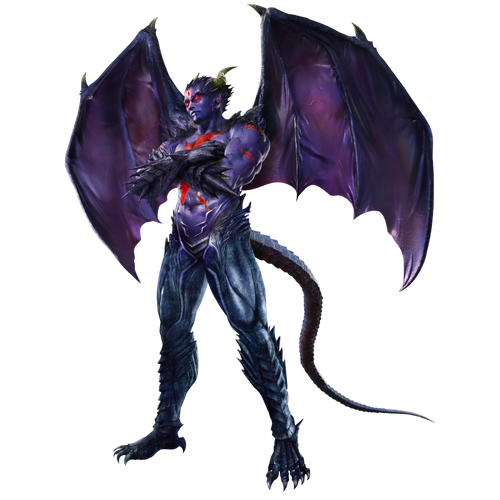 Kazuya Mishima was born to Heihachi Mishima and Kazumi Mishima. As a 10-year old child, Kazuya was thrown down a cliff by his father Heihachi who wanted to see if he was not human, since he had his mother's cursed blood. As expected Kazuya only survived the fall due to the Devil Gene that would ensure the power to defeat his father in exchange for his soul. As a result, Kazuya became more ruthless and cold-hearted.

Classification: Human Martial Artist, Carrier of the Devil Gene, Head of G Corporation, Former Head of the Mishima Zaibatsu, Champion of the 1st King of the Iron Fist Tournament

Powers and Abilities: Superhuman Physical Characteristics, Acrobatics, Master Martial Artist, Regeneration (Likely Low-Mid), Chi Manipulation (Can enhance the strength of his attacks), Electricity Manipulation, Paralysis Inducement, Telekinesis (And possibly Explosion Manipulation through it in Devil Form), Possession (Half of his "devil" soul succeeded in inhabiting Jin's body), Extrasensory Perception, Dream Manipulation (Taunted and yelled at Jin in his dream), Soul Absorption (Tried to absorb half of his "devil" soul from Jin), Energy Projection (Can fire laser beams), Can generate shock waves, Aura, Possibly Forcefield Creation, Resistance to Electricity Manipulation and Possession (Unaffected by his own electricity and gained control of his Devil Gene), Transformation (Into his Devil form, which increases his stats) | All previous abilities, Enhanced Senses, Flight, Intangibility, Teleportation, Non-Physical Interaction (Punched Shin Akuma when he was intangible)

Lifting Strength: Class 100 (Is stronger physically than characters comparable to Raven, which can pick up and throw objects weighing over 80 tons with ease) | At least Class 100 | Class K

Stamina: Very high, is a skilled martial artist and is one of the strongest characters in the verse.

Range: Standard melee range. Extended melee range with shockwaves and telekinesis. Planetary with lasers (His lasers can reach beyond space)

Intelligence: Gifted (Kazuya is a skilled combatant, he has mastered the Advanced Mishima Style and Fighting Karate, he is also a brilliant war tactician. Kazuya is the head of the G Corporation and easily managed to turn the public opinion to his side)

Weaknesses: He could not control his Devil Gene until Tekken 4. Devil Gene users are vulnerable to the holy powers of the members of the Kazama bloodline and the Archers of Sirius. There are also specifically made chains that can neutralize the Devil Gene's powers, though Heihachi is the only one known to have access to them.

- Devil Form: Unlike his son, Kazuya was always in control of his Devil Form, he is shown to easily transform at will. The arsenal of this form includes:

Tekken 7 Devil Kazuya.
Add a photo to this gallery