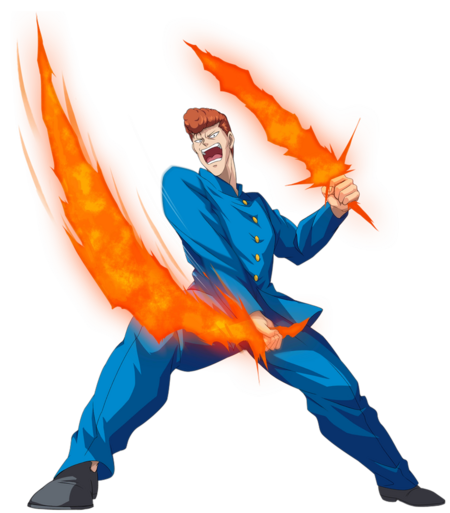 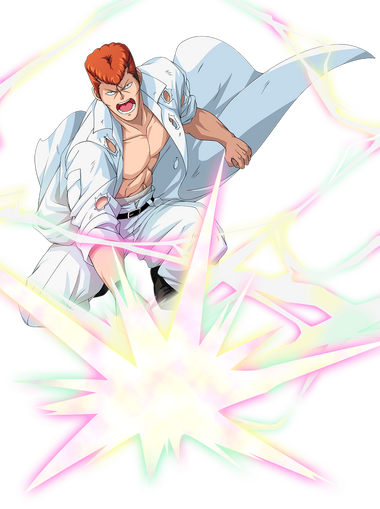 Kazuma Kuwabara, more commonly known as Kuwabara, is the younger brother of Shizuru Kuwabara and one of the main protagonists of the series, along with Yusuke Urameshi, Kurama & Hiei. He is introduced as a rival for Yusuke, but quickly becomes a royal ally during the beginning of the series.

Age: About 18 by the end of the series

Attack Potency: Building level+ (Is the weakest member of team Urameshi but should be only slightly weaker than Kurama. Fought a stronger Saint Beast than the one which gave Kurama a hard time and lasted a good while) | Large Town level, higher when angered (Managed to stab through Younger Toguro and later defeat Risho and Elder Toguro) | Likely Continent level (Fought Defensive Armor Shinobu Sensui along with Hiei and Kurama, but was clearly outclassed), can Negate Durability via Jingen Tō

Speed: Supersonic (Calc) | At least Hypersonic+, High Hypersonic when angered (Slower than Dark Tournament Yusuke and Hiei but is nonetheless barely capable of keeping up with combatants of such speed) | Massively Hypersonic (Kept up with a bloodlusted Hiei and Kurama as they chased after Sensui)

Durability: Building level+ (Should be no less durable than Kurama. Took numerous blows from a fully serious Hiei at the commencement of his training for the Dark Tournament) | Large Town level, higher when angered (No-sold an attack from Elder Toguro) | Likely Continent level (Tanked punches from a serious Defensive Armor Sensui)

Stamina: Very high; is able to keep fighting after getting a huge beating with a possible broken spine.

Intelligence: Starts off a bit dumb, but gains very high booksmarts later on.

Weaknesses: Kuwabara is a bit too straightforward as a fighter and can be a bit dumb sometimes.