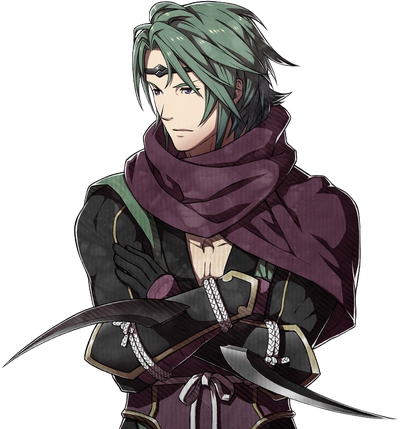 Kaze, a Ninja from Hoshido and a protagonist in Fire Emblem Fates, as a child, Kaze was with Sumeragi when he was going to King Garon's "peace conference", and noticed several Nohrian soldiers on the way, which, despite being suspicious of the soldiers, he did not warn Sumeragi of his future assassination. Kaze then felt that if he had told Sumeragi that Nohrian soldiers were coming to assassinate him, Corrin would not have been kidnapped and Sumeragi would not have been assassinated, so the ninja made a vow to himself to possibly serve Corrin and protect them to make up for his past mistake, Kaze then ends up captured by Nohrians and is forced to battle an unaware Corrin. Kaze is then spared by Corrin, causing Garon to get angry at him, making Leo quickly fake Kaze's death. Kaze later joins Corrin despite whatever path they have chosen.

Powers and Abilities: Superhuman Physical Characteristics, Weapon Mastery (Shuriken and Daggers), Afterimage Creation, Teleportation, Poison Manipulation via Poison Strike, Stealth Mastery (Is a Ninja, after the events of Fates he is only rumored to have existed), Duplication (Can learn Replicate as a Mechanist), Can deal greater damage against Puppets, Stoneborn, and other Golem-like entities with Golembane, Rides on top of a Puppet as a Mechanist (The Puppet also attacks using Shuriken, Daggers, or Arrows), Non-Physical Interaction (Can harm souls), Extrasensory Perception, Can survive without his soul

Durability: Town level (Was able to take hits from Corrin)

Intelligence: At least Above Average, but he tends to be oblivious about Women 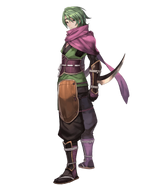 Kaze in Fire Emblem Heroes
Add a photo to this gallery