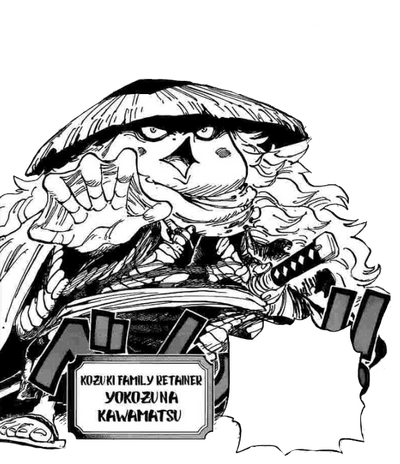 Kawamatsu, also known as Kawamatsu the Kappa is a fish-man who is a yokozuna-ranked sumo wrestler. As a child, he was shipwrecked in Wano and orphaned soon afterwards. After Kozuki Oden rescued him from citizens ostracizing him, he went on to serve as one of Oden's Nine Red Scabbards until Oden's death 20 years ago.

Kawamatsu would go on to be imprisoned by the Beasts Pirates for 13 years until he was ultimately freed by Monkey D. Luffy, and he reunited with the Nine Red Scabbards to fight Kurozumi Orochi and Kaido and avenge Oden.

Tier: At least 7-A, Possibly higher

Power and Abilities: Superhuman Physical Characteristics, Expert Swordsman and somewhat skilled marksman (Can fire the bones from fish with enough speed and precision to kill someone), Yokozuna-Ranked Sumo Wrestler, Underwater Breathing (Type 2), Statistics Amplification (Strength and speed of fishmen is doubled when underwater.), Advanced Armament Haki, Resistance to Poison (Was fed only poisonous fish for over 13 years yet didn't die or succumb to the poison like Tama did)

Attack Potency: At least Mountain level, possibly higher (Should be comparable to the likes of Denjiro and Ashura Doji as all three were described as assets worth 100 men by Kin'emon impying he is among the strongest of the scabbards. Despite serving 13 years in imprisonment being only fed poisonous fish Raizo states that his skill has not waned at all. He was able to stop the conflict between Zoro and Gyukimaru on his own)

Stamina: High (Endured eating nothing but poisonous raw fish for over 13 years without dying)

Intelligence: Incredibly Skilled Combatant and swordsman, he developed his own sword-style which incorporates his strength as a Sumo-Wrestler with his swordsmanship.

Kappa-ryu: Kappa-ryu is a swordsmanship style used by the samurai Kawamatsu. As noted by Raizo and Kikunojo, this style is Kawamatsu signature fighting style, despite the latter being a sumo wrestler. According to Kawamatsu, fighting against the Kappa-ryu is like trying to swim against raging waters. When wielding his Soto Muso, Kawamatsu was able to blow away several men charging against him, taking them down with a single blow.

Retrieved from "https://vsbattles.fandom.com/wiki/Kawamatsu?oldid=6526549"
Community content is available under CC-BY-SA unless otherwise noted.