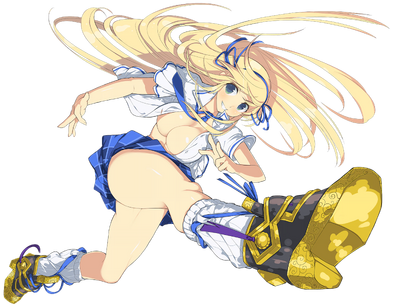 Katsuragi is a playable character in the Nintendo 3DS series of Senran Kagura. She makes her debut in Senran Kagura Burst.

When Katsuragi was still young, she lived a normal life with her parents and her pet dog, Choco. Her parents were both shinobi,  fulfilling missions which were issued to them by the higher ups. However, one day, both of Katsuragi's parents failed one particular mission and were told to give up their lives as punishment. To avoid getting Katsuragi involved, the two decided to become renegade shinobi and ran away, abandoning their daughter in the process. Feeling dejected, Katsuragi decided that day she would become a strong shinobi in order to atone for her parents' crimes and reunite with her family. Thus, she enlisted in the good shinobi school of Hanzō Academy.

Katsuragi's a 3rd-year student who does things first, thinks later. A tomboy through and through, she wears nothing under her school uniform which she doesn't wear properly, to begin with. She cares for her fellow shinobi, even if she often deals unwelcome sexual harassment towards them.

Attack Potency: Large Building level (Should be comparable to if not stronger than Hibari and Asuka, went head to head with Hikage on several occasions), higher with Frantic Mode

Speed: Supersonic (Can keep up with Hikage to a degree)

Stamina: Above average (Mostly due to her training as a shinobi)

Intelligence: As a shinobi, she is a well-learned fighter all about skill and combat.

Weaknesses: She can't resist wanting to grope or talk about her opponents' boobs, even when engaged in a serious fight. Also highly vulnerable when her clothes are completely ripped in battle.