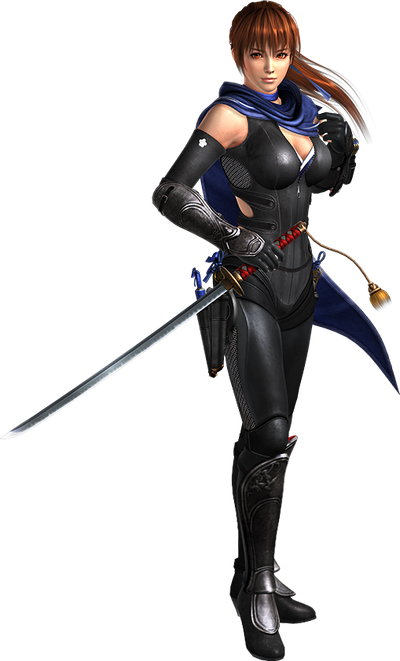 Kasumi is the main heroine of Dead or Alive game series, and debuted in the re-release for Wii U Ninja Gaiden 3: Razor's Edge as a free DLC character. Although she also got a very brief cameo in Sigma 2, but only as the faceless. Kasumi is the sister of Hayate and half-sister to Ayane and a practitioner of the Tenshinmon Style of Mugen-Tenshin Ninjutsu. They lived happily together until one-day Raidou came for revenge and snapped Hayate's spine. That sent him into a coma that was thought to be permanent, so he was left for dead. Kasumi ran away from her village to avenge her brother, knowing full well the consequences of becoming a runaway shinobi: death.

After defeating Raidou, she enters the second tournament after hearing that her brother is alive and has been taken by DOATEC for use in Project Epsilon. She finds him suffering from amnesia and going by the name of Ein, and helps him recover his memory. In the 3rd tournament, she remains on the run but encounters and fights her brother. By the time of the 4th tournaments she realizes that no assassins have been sent her way as of late, and discovers that they have gone to assault DOATEC and put an end to their evil schemes. She enters the 4th tournament to investigate and prevent her brother to enter in what she believes will be a bloodbath.

In the 5th game, Kasumi becomes Helena's 'ally/messenger' in order to hunt down the remaining Alpha-152, in a slightly reckless degree. This is because this Kasumi is actually a perfect Alpha clone that acts perfectly like the original. Hayate caught wind of this and along with Ayane, killed this clone. When Hayate gets into trouble, Hayabusa summons the real Kasumi note to come and help. Once she rescued Hayate and destroyed the clones, Kasumi swore to take down and defeat Donovan.

Range: Several dozen meters with projectiles, much higher with Ninpo, possibly in the hundreds of meters range

Standard Equipment: Basic throwing kunai (Although the ones she actually throws look more like Western knives), windmill shuriken (Can combine her throwing knives to create one, including a precision-guided boomerang effect), her elegant Wakizashi blade

Intelligence: Skilled combatant, is knowledgeable of Ninpo magic and is talented as a ninja

Weaknesses: Pacifist (Kasumi refuses to fight unless there is no other choice)