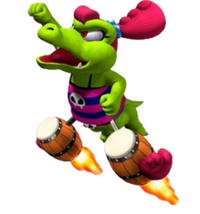 Kass is a fictional character in the Donkey Kong series of video games, making her sole appearance in Donkey Kong: Barrel Blast for the Wii. She is a young Kremling who has a rivalry with Dixie Kong, sharing her stats in Barrel Blast.

Age: Unknown (Referred to as young in her Smash Bros Brawl trophy bio)

Attack Potency: Small Country level (Can dash into Donkey Kong and other characters of equal power hard enough to stun them)

Durability: Small Country level (Can shake off punches from Donkey Kong and other characters of equal power)

Retrieved from "https://vsbattles.fandom.com/wiki/Kass?oldid=4829397"
Community content is available under CC-BY-SA unless otherwise noted.