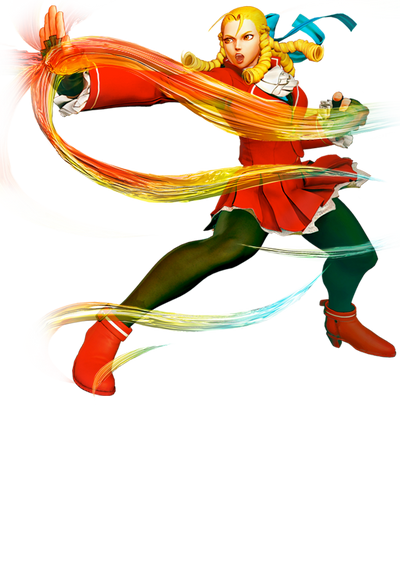 She is a rival of fellow schoolgirl Sakura Kasugano and has a similar outfit, complete with sailor fuku (this one being predominantly red and white with a blue bola tie), but uses the martial art style Kanzuki-ryū kakutōjutsu, a style that she created herself, instead of Sakura's imitation of Ryu's martial art. Because of her elite upbringing, Karin has a habit of acting snobby and dismissive and thinks lower-class people are "commoners" and thus below her.

Speed: At least Supersonic+ (Kept up with a casual Ken Masters and F.A.N.G)

Durability: Small Town level+ (Managed to survive being hit by Blanka, survived being attacked by both Juni and Juli which are some of Bison's best dolls. Took hits from F.A.N.G)

Intelligence: Above Average (She has managed to keep her company floating)

Weaknesses: She is short-tempered in some degree, and has a big ego.