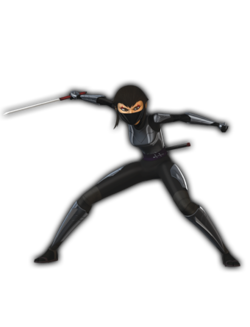 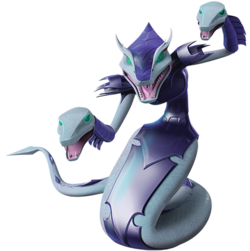 Karai (real name Hamato Miwa) is the antagonist-turned-protagonist in the 2012 Teenage Mutant Ninja Turtles TV series. The birth daughter of Master Splinter, the adoptive daughter of Shredder (Oroku Saki) and the older adoptive sister of Leonardo, Raphael, Donatello and Michelangelo, she previously served as a highly decorated, yet infamously corrupt, rebellious, arrogant and condescending heiress of the fearsome Foot Clan, a master kunoichi, and the 16-year-old adoptive daughter of the Shredder, whom she is very loyal to with close ties, initially considering him her "father" (despite frequently being rebellious and arrogantly argumentative).

Speed: Supersonic+ (Can match pace with Leonardo. Has tagged Splinter and the Shredder)

Intelligence: Trained in ninjutsu at a young age, Karai is a high rank as a full-fledged kunoichi of the Foot clan and is capable of going toe to toe with the likes of Leonardo.

Weaknesses: Can be bitter and overconfident

Retrieved from "https://vsbattles.fandom.com/wiki/Karai_(2012)?oldid=4116315"
Community content is available under CC-BY-SA unless otherwise noted.