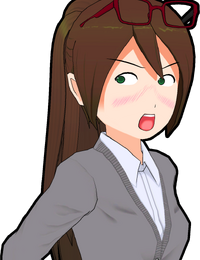 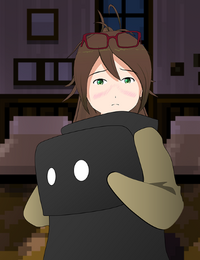 Kara was one of many Yanderes created, an artificial race of biologically engineered weapons given the form of young women. They’re programmed to fall in love with an individual, their “Senpai” and protect the individual at all costs. Kara was not only the last Yandere manufactured, a perfect copy of her living counterpart, but being the strongest and most beautiful of her kind, not to mention obedient, Kara was the last Yandere remaining when The Family disposed of the rest.

When Lillith’s Brother was brought to the organization, assuming his brain tumor would be removed and his fading memories would improve, he also had a device of sorts implanted into his brain, which not only connected him to the TriNemesis (being the one human who can survive the connection) but also resulted in Kara’s consciousness being downloaded into his head in an intent to corrupt him and make him use the TriNemesis as a weapon. It was eventually successful when his fading memories finally allowed her to take control and use the TriNemesis; first to destroy the AppSir building, then the surrounding city, and finally to kill Doctor Rotschstein and Lillith and to destroy the Roschstein Institute

Some time after the destruction of the Appsir building, Darius found a copy of DERE SOURCE. This version of the game, however, was corrupted, possessed by Kara, as well as Yanna and Myles. As Darius tried to create DERE.EXE, Kara continued to glitch the game. While she created appearances of herself, she actually hid within the game as the player character. Darius eventually took assistance from Yanna to delete Kara.

It turns out that Kara wasn’t fully deleted, however, and was simply sent to the Recycling Bin. Darius later used her consciousness to create A.I.D.E., an artificial intelligence to assist the player in DERE EVIL.EXE. When Kara’s Yandere side started to break through once more, he deleted A.I.D.E., which resulted in Kara being freed once more.

Powers and Abilities: None Notable | Superhuman Physical Characteristics, Genius Intelligence, Resistance to Soul Manipulation (Lacks a soul) and possibly Biological Manipulation (It’s unknown whether or not her body is made of organic materials) | limited Possession (Was downloaded into the consciousness of Lillith's Brother), Illusion Creation (Creates hallucinations within Lillith's Brother's mind, making him think she's in the real world when she isn't), Technology Manipulation (When in control of Lillith's Brother's body, can use his connection to the TriNemesis to take control of it) | Immortality (Unknown Type as a game character and Type 4), Resurrection, Tombstones are checkpoints, Double Jump (Can jump twice before touching the ground, regardless of whether the first jump is touching the ground, Was given unlimited jumps by the developer during one level), Stealth Mastery (Disguised herself as the player character), Light Manipulation (Emitted a light in the dark level to see her immediate surroundings), Teleportation, Technology Manipulation (Caused the game to crash), Data Manipulation (Can create glitches), Reality Warping (Took away her unlimited jumps, Can reverse the player’s controls, Can turn text into manipulatable platforms, Could change the art style of the game) Darkness Manipulation (Created a level that was pitch black), Weapon Creation, Avatar Creation, Summoning, Duplication (Can create a copy of herself or a different person that copies their movement), Fire Manipulation, Possession (Could supposedly take control of the player if she broke free from the game)

Attack Potency: Human level, possibly Street level (May compare to Doctor Rotschstein, despite being younger) | At least Street level, likely higher (Was built to be stronger than humans, including Doctor Rotschstein, Is the strongest of the Yanderes, Killed Kia) | Below Average level, Average Human level, possibly Street level while taking control of Lillith's Brother's body, City level by controlling the TriNemesis | Below Average level (Her consciousness exists in a video game, Can smash through the wall to the Limbo System, or the space outside of the actual game)

Durability: Human level, possibly Street level (May compare to Doctor Rotschstein, despite being younger) | At least Street level, likely higher (Was built to be stronger than humans, including Doctor Rotschstein, Is the strongest of the Yanderes, Has “enhanced durability”) | Below Average level (Her consciousness was downloaded into the consciousness of Lillith's Brother), Human level, possibly Street level while taking control of Lillith's Brother's body | Below Average level (Her consciousness exists in a video game)

Weaknesses: Yanderes can be put into a trance if given specific symbols or keywords, Yanderes are always being tracked by The Family, Fears the “nuns” that watched over the Yanderes