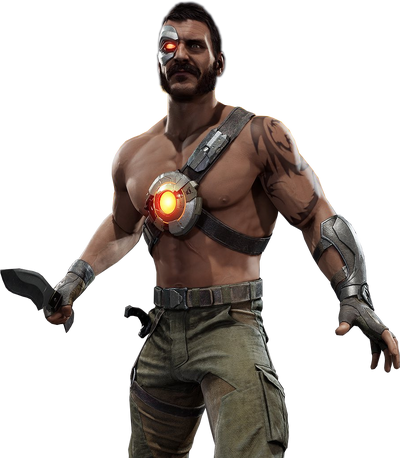 Kano is a mercenary and the leader of the Black Dragon organization, which is responsible for the deaths of many designed targets and for illegally selling weapons designed for murder. In both timelines, he wears a metal plate on a part of his head due to the wounds he received but is also equipped with a glowing red plated eye capable of emitting laser beams.

Kano is known for many crimes such as first degree murder, compromising national security, possessing illegal weapons and equipment, narcotics trafficking, smuggling, theft, extortion, conspiring with evil organizations and many more. He is a wanted man to the point even a national organization known as the Special Forces wants this man incarcerated for life and has become consistent rivals with many of its members such as Sonya Blade and Jax. His cunning and treacherous nature has made him a versatile survivor, escaping every situation of death or capture.

Powers and Abilities: Superhuman Physical Characteristics (Possesses superhuman strength allowing him to rip out heads, pull out entire skeletons and tear people in half), Martial Arts (Xing Yi, Aikido, Wrestling, Ba Gua), Weapon Mastery (Wields knives, rifles, pistols, miniguns, grenades, improvised weapons [such as [molotovs and chemicals]), Cyborgization (Partial, has an eye implant), Energy Projection and Heat Vision (Can fire searing beams from his eye implant), Energy Manipulation (Able to generate red energy), Stealth Mastery (Skilled in infiltration), Damage Boost (Can increase the power of his attacks with chi), Chi Manipulation (Can do a Neijin, a chi control method, to increase his damage), Limited Explosion Manipulation (Via grenades), Limited Illusion Creation (Has a disguise device on his wrist), Limited Magnetism Manipulation (Uses a device that generates magnetic fields), Limited Poison Manipulation (Via pocket chemicals), Limited Fire Manipulation (Via molotovs and lighters), Information Analysis (Scanned Sektor and saw information on the damage he took), Enhanced Senses (Has integrated X-ray vision), Vehicular Mastery (Skilled pilot and driver), Preparation (Can use prep to utilize the Black Dragon's resources), Acrobatics (Exercies enhanced condition. Can curl into a ball before flying in a specific direction and perform longer leaps), Can interact with his past self, but will share with it irreparable damage & death (As shown through MK11)

Lifting Strength: Class 5 (Can tear heads off, rip out entire skeletons and rend people apart with his legs)

Intelligence: Gifted (He is a genius in the art of crime, the leader of an international crime cartel [Black Dragon], is very cunning, resourceful and skilled combatant)

Kano's versus render in MK: Armageddon. 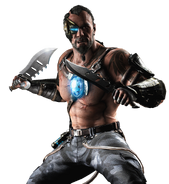 Kano in MK11, now wtih chest hair.
Add a photo to this gallery