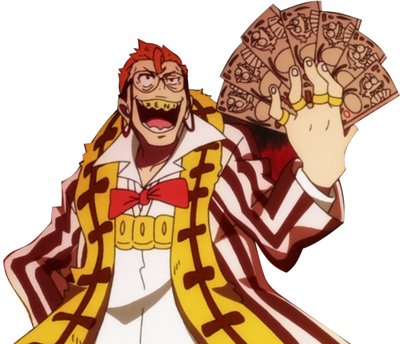 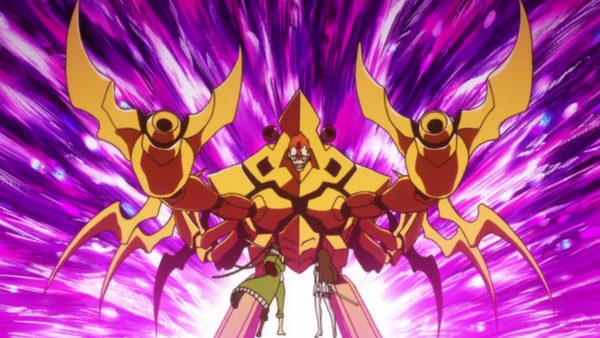 Kaneo Takarada is a supporting character in Kill la Kill and student council president of Naniwa Kinman High School, an academy that has jurisdiction over the city of Osaka.

As heir to his family's "Takarada Conglomerate," Kaneo has an almost absurd level of wealth, which he's more than proud of using to get whatever he wants. Takarada believes that throughout human history, man's ultimate motivation for everything has always been money, so by flaunting his wealth over people, he can make them obey his every whim.

Despite his seemingly evil motivations and actions, he's loyally aligned with the organization "Nudist Beach," which aims to protect all life on Earth no matter the personal sacrifice. Kaneo shows this surprising selflessness when he spends every last cent of his beloved wealth towards funding S.S. Naked Sun's construction.

Powers and Abilities: Superhuman Physical Characteristics, Skilled in hand to hand combat, Able to shoot fire, missiles and clay from its cannons

Attack Potency: Mountain level (Briefly held his own against MKIII Uzu Sanageyama, who was stated multiple times to be giving it his all)

Durability: Mountain level (Withstood numerous unrestricted hits from Uzu both with and even without his armor)

Weaknesses: In order to have better mobility and efficiency, his DTR is forced to have various openings in its armor that can potentially be exploited

Retrieved from "https://vsbattles.fandom.com/wiki/Kaneo_Takarada?oldid=5449073"
Community content is available under CC-BY-SA unless otherwise noted.