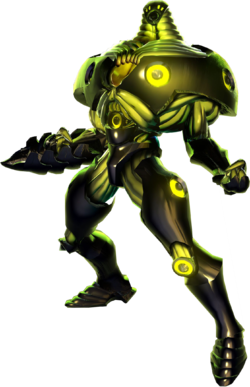 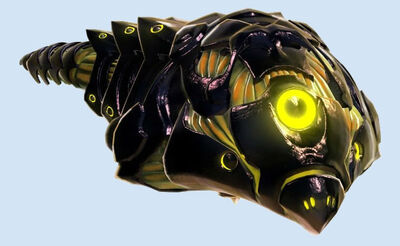 Kanden was the brainchild of the Enoema Living Weapons project, an experiment to create a so-called super soldier that was invincible. However, Kanden's mind was still no more than a mere Enoema's, and therefore his brain could not withstand the complicated neural combat encoding sequences. This completely transformed his mind, leaving him as a ferocious, unbelievably powerful and dangerously unpredictable monster. Kanden escaped the research lab, killing the scientists that created him, and destroying their laboratory.

Kanden then took great advantage of his strength, durability, and near-immortality by trying his hand at becoming a Bounty Hunter. Built with programming to hunt, fight, and destroy, he could be the ultimate super-soldier. When Kanden received word of a powerful super-weapon in the Alimbic Cluster, he saw a great advantage that he could grasp in his hands. His only goal is to become the ultimate bounty hunter, with no peers.

Attack Potency: Unknown, at least Town level (The Volt Driver can create terawatts of energy with ease and should be on par with, if not superior to Weavel)

Durability: Unknown, at least Town level (Can take shots from his own weapon head on with almost no injuries)

Standard Equipment: The Volt Driver and his bombs

Weaknesses: Weak to the Battlehammer from Weavel (A weapon that shoots nuclear energy)

Retrieved from "https://vsbattles.fandom.com/wiki/Kanden?oldid=4116273"
Community content is available under CC-BY-SA unless otherwise noted.