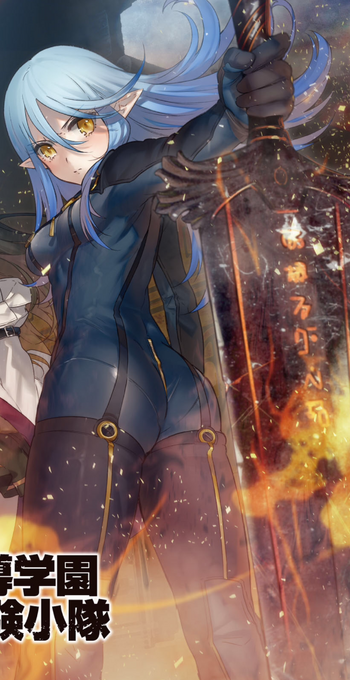 Kanari is a wood elf-human hybrid created by Ikaruga Suginami to sabotage Alchemist’s project that aimed at recreating the extinct Dark Elf race. Unlike Dark Elves, who possessed powerful magic power, Wood Elves lack magic but have outstanding physical abilities. Though Ikaruga believed her dead at Alchemist's hands, Kanaria survived and ended up in Valhalla, where she became Orochi Kusanagi's disciple and learned the two Kusanagi swordsmanship styles.

Attack Potency: At least Small Building level (Could trade blows with a not serious Takeru Kusanagi on his God Hunter Form, can split open the ground with her blows even without Lævateinn)

Speed: At least Superhuman normally, at least Supersonic with Soumatou (Wood Elves have superhuman bodies far surpassing humans, can use Soumatou and trade blows with Takeru on his God Hunter Form)

Durability: At least Small Building level (Rammed into someone at 500km/h without issue, could trade blows with Takeru on his God Hunter Form, though he wasn’t serious and she was quickly outmatched)

Kusanagi Double-Edged Style: The Double-Edged Style is a style developed by the Kusanagi family to fight the monsters that roamed the earth one thousand years ago. The style’s basics include the redirection of the power behind enemy blows to allow the user to parry attacks from non-humans without being crushed or blown away, or training so that they can move their upper body and lower body independently in order for the upper body to remain undisturbed and flexible no matter how the user moves their legs. The style includes training with all kinds of swords, both eastern and western.

Kusanagi True-Light Style: A personal sword style of Takeru’s family. The True-Light Style, the public style that the family hands to its members, is an anti-personnel style designed to be used on humans that was developed from the Double-Edged Style. It focuses more on speed and hit rate than on raw power.

Battle Driving: A running technique handed down the Kusanagi family where the user bends forward to an incredible degree as they run, all the while slashing any enemy they pass by without slowing down, using the posture to put the user’s full weight behind the slashes.

Micro Machine Guns: A pair of modified micro machine guns that fire overpressure ammunition capable of piercing bulletproof glass. The long extended magazines used by the guns are durable enough that Kanaria can use them to bludgeon the enemy as if they were a pair of tonfa.

Lævateinn: A powerful sword-type Magical Heritage, god-slaying weapon, and Sacred Treasure. It takes the form of a two-handed sword Kanaria keeps in a disproportionate black sheath on her back. The sword itself has a characteristic flame-like pattern and emits strange, hot air even while not in use. Though its pure destructive power was originally superior to that of even Mistilteinn, it was once broken by its previous wielder’s battle with Mistilteinn’s wielder, so it doesn’t demonstrate a personality like other high-ranked Magical Heritages and cannot use its full, original power. The God Hunter Form is unreachable, and even Hero Form is faulty, so Kanaria doesn't use it.

Retrieved from "https://vsbattles.fandom.com/wiki/Kanaria?oldid=4116268"
Community content is available under CC-BY-SA unless otherwise noted.