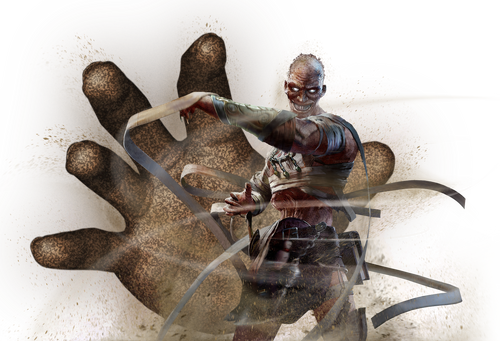 Kan-Ra is an immortal Babylonian sorcerer. Cursed to walk the earth as an immortal corpse, after a failed assassination attempt to kill the ruler of that time. Kan-Ra endured by balancing the curses he placed on himself with dark magic and artifacts. His goal: to gain knowledge that'll grant him absolute power over humanity. He has been hunted down by the war golem, Aganos, and they are bitter rivals who have fought for centuries. That was until their last battle led them both being captured by the Night Guard. Though both couldn't be killed, each were sealed away with Kan-Ra being burned to ash and left to be a formless dust inside a jar,

However, centuries later, Ultratech attacks the Night Guard and in the chaos, Kan-Ra is freed from his prison allowing him to change back to his physical form. He is now unleashed upon the modern world... Ripe for the picking.

Attack Potency: Island level (Has been a consistent rival of Aganos for hundreds of years)

Standard Equipment: Bandages, Knife (Though he doesn't use it), various artifacts (only for his study),

Intelligence: Genius (Has lived for thousands of years by studying black magic and devised a way to balance his curses to his advantage like figuring out immortality)