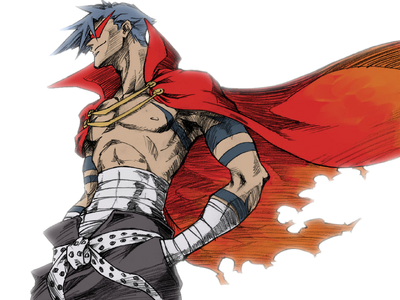 Kamina (カミナ, Kamina) was a young man from Jeeha Village, the founder and first leader of Team Gurren and deuteragonist of the first arc of Tengen Toppa Gurren Lagann.

Classification: Human & Spiral, Dai-Gurren Brigade Leader, pilot of Gurren/Gurren Lagann, inspiration to those who will come

Attack Potency: Wall level (On par with Viral, able to cut apart a large swath of grass beyond his reach with one sword swing.) | Likely City level (Was able to fend off Endiku, though he was clearly outmatched.)

Speed: Superhuman with Subsonic+ reactions/combat speed (Snatched an arrow flying at him out of the air at an extremely close range), Supersonic+ attack speed with guns | Likely Hypersonic

Intelligence: Above average; is a very quick learner and a good tactician, although sometimes Kamina acts thoughtlessly.