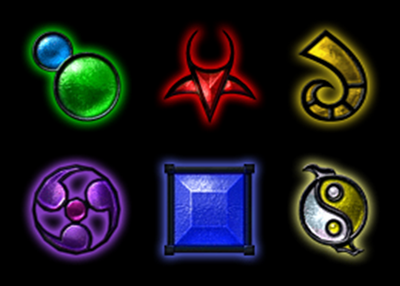 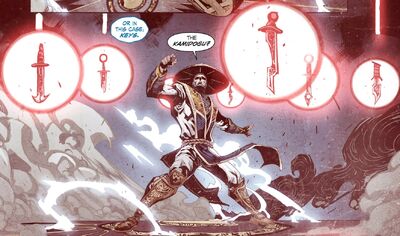 The Kamidogu (from the Japanese word 神道具 meaning "divine tool") are magical items that contain the essence of the realm that they represent. A single Kamidogu does not contain or give any power at all, but when fused together they become a weapon resembling a ball of energy that has the ability to control all of reality. It is also capable of granting a transcendent status to the user, turning them into an omnipresent being.

In the current timeline, the Kamidogu have returned with a brand new purpose behind them. It is implied that they are still artifacts that are keys to manipulating reality, but they are now used to invoke powerful Blood Magik that greatly increases the potency of the user's powers if they cut themselves with it.

Age: Existed before time (Was used by The Elder Gods to split the One Being when they fought in a timeless void)

Attack Potency: Small Town level+ (In a non-canon ending, Jax used a Kamidogu to kill Onaga by smashing it to his head) | Universe level+ (Capable of merging all of the realms, shaping the entire universe's reality and granting the user a transcendent existence as an omnipresent being) | Varies (Has been inconsistently portrayed as being capable of wounding kombatants of differing durability)

Durability: Small Town level+ (Can be shattered by Shujinko) | Unknown (Exists as a ball of energy) | Unknown (Was never shown to be broken)

Weaknesses: Can be shattered | None notable | Susceptible to corruption by outside forces, prolonged usage of Blood Magik drains the user of their power

Retrieved from "https://vsbattles.fandom.com/wiki/Kamidogu?oldid=4790360"
Community content is available under CC-BY-SA unless otherwise noted.