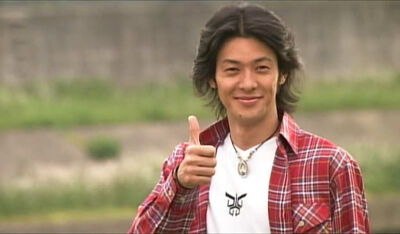 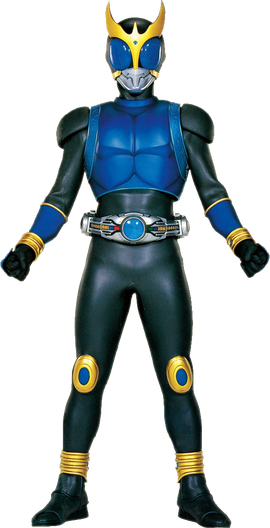 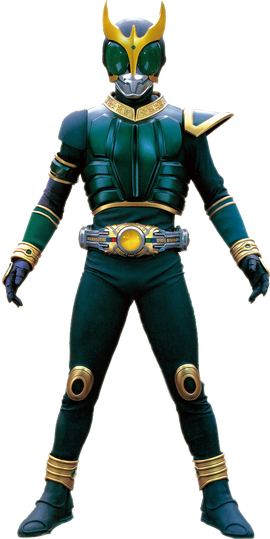 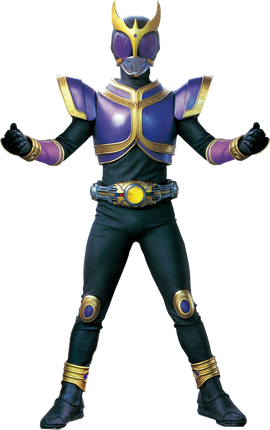 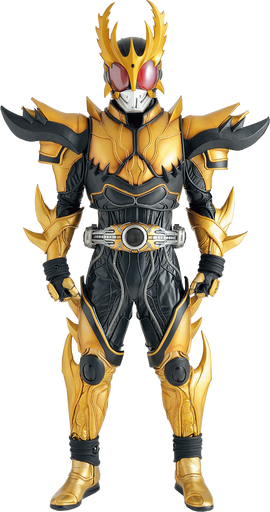 Yusuke Godai (五代 雄介 Godai Yūsuke) is the main protagonist of Kamen Rider Kuuga. He was a happy-go-lucky honest individual who traveled around the world mastering 2000 different skills and talents that he used to help others. One day, he found himself drawn to a mysterious stone belt and faced the Gurongi, an ancient civilization made up of beings that could transform into monsters. He then became Kamen Rider Kuuga (仮面ライダークウガ Kamen Raidā Kūga) to help the police fight the Gurongi and ensure the happiness and safety of others. Yusuke soon learned, however, of a horrible revelation between Kuuga and the Gurongis' leader.

Superhuman Physical Characteristics, Transformation (Can access different forms with varying strengths and weaknesses), Martial Arts and Acrobatics (Likely had some previous training in combat skills as a part of his goal to master 2000 talents. His Dragon Form focuses on acrobatics and swift movements mostly because of its insane jumping capabilities), Vehicular Mastery (Using his Try and Beat Chaser cycles, he was able to masterfully fight against Gurongi), Weapon Mastery (Gun, sword, and staff), Explosion Manipulation (His attacks leave a mark on his target, causing them to explode), Weapon Creation through Matter Manipulation (His other form can change any object into their signature weapon by manipulation the object on an atomic scale), Enhanced Senses (The Pegasus form gives him the ability to see, hit, and hear his opponents on city-wide scale with extreme precision), Regeneration (High-Low. Injuries that would take at least a month to heal takes three hours for him. He quickly comes back from injuries that would normally hospitalize others. He once had a spear shot through his shoulder but was just fine the next day if not sooner), Summoning (He can summon Gouram, a stag-beetle-like entity that helps him in fight), Longevity (The Amadam power can increases the user's lifespan to an unknown degree for at least thousands of years since the last user, who is still alive till the main series, came from an ancient civilization)

All previous abilities enhanced plus Statistics Amplification and Transformation (By allowing himself to be a conduit for electricity to power the Amadam, Yusuke obtained upgraded versions of his standard forms, boosting his stats and power), Reactive Power Level (Yusuke becomes much stronger each time he goes through a near-death experience. His power continues to evolve as Godai's willpower and desire to become stronger than the Amadam makes him stronger), Resistance to poison (The Amadam power countered the poison created by Me-Ginoga-De that could kill a group of humans in mere seconds and bypass gasmasks.)

All previous abilities enhanced and previous weakness removed, plus Fire Manipulation through Matter Manipulation and Weather Manipulation (Possesses similar abilities to Daguva, who can create vicious snowstorms and heavy rain, along with the ability to create fire), Extrasensory Perception (Stated that in The Ultimate form, he could see through the human disguises of the Gurongi), Resistance to Corruption (Entering the Ultimate form would turn a normal person into a relentless monster bent on killing everything, however, this Godai's gentle nature can restrain these impulses), The Ultimate Form can use any of Kuuga's weapons.

Attack Potency: Athlete level (Yusuke is a healthy and more active person than most of the people around him and was once trained by the police) | At least Building level | Small Town level (Rising Mighty Kick generates this much power) | At least Island level (His Amazing Mighty Kick possesses this much power), Large Star level as Ultimate Form (Comparable to Agito who can harm the Overlord of Darkness who is capable of creating a constellation The Ultimate Kick is said to be capable of destroying the Planet Earth itself with the resulting blast) | Solar System level as Rising Ultimate Form (Is the evolution of Ultimate Form thus it power are far greater than the previous form. Presumably surpasses nearly all of Kuuga's fellow [[Kamen Rider Wizard |Kamen Riders]] in sheer power)

Lifting Strength: Normal Human | Superhuman (Can do this while in his weakest form)

Durability: Athlete level | At least Building level (Can tank explosive shots from Me-Giiga-Gi, which can vaporize chunks of concrete) | Small Town level (Survived the explosion of his Rising Mighty Kick without a scratch) | At least Island level (Was at the epicenter of his Amazing Mighty Kick's explosion), Large Star level as Ultimate Form | Solar System level as Rising Ultimate Form

Range: Standard melee range, extended melee range with Titan Sword and Dragon Rod to hundreds of meters with Pegasus Bowgun. His attack in Rising Forms can generate explosions with an area of effect of 6 kilometers. Possible planetary with Ultimate Kick.

Intelligence: Above Average, possibly Gifted (He learned 2000 various skills which presumably included some forms of fighting. After becoming Kuuga and gaining experience from fighting the Gurongi, Yusuke became even stronger, quickly adapting and learning about his power as well as how to fight against his enemies)

Weaknesses: If he's forced to go into Growing Form he won't be able to transform again for two hours. Pegasus Form's increased sensory stimulation overwhelms Kuuga over time, preventing him from using this form for more than 50 seconds without being forced into the Growing Form and rendered unable to transform again for 2 hours. If enemies manage to nullify his attack, they can prevent from being exploded | Same as before, but Yusuke can only access Rising Forms for 30 seconds before reverting to his respective base form or Growing Form if he has sustained too much damage. The amount of time he can use the Pegasus form has increased by 30 seconds, for a total of 1 minute and 20 seconds. | None notable.

Don't mess with Kuuga
Add a photo to this gallery