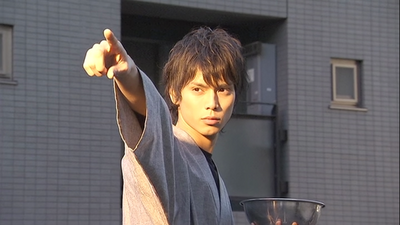 In 1999, a meteor crashed to Earth with the planet reduced to a barren wasteland by the year 2006. What remains of humanity is under threat from both a diminished water supply and an Extra-terrestrial race of insectoid mimics called Worms. The organization ZECT acts to combat the Worm threat by giving operatives items called Zectors to fight the aliens as Kamen Riders. But one Zector came in possession of a clever and unpredictable wild card named Souji Tendou, who used the power of the Hyper Zector to minimize the meteor's extent of damage to effect only Tokyo's Shibuya district. He then gives his Zector to his younger self, who becomes the new timeline's Kamen Rider Kabuto and fights the Worms and those in ZECT who perceive him a threat.

Powers and Abilities: Superhuman Physical Characteristics, Transformation, Master at H2H combat (Tendou is a master of hand-to-hand combat, being able to swiftly overpower most Worms and even other ZECT agents with ease), Weapon Mastery (Tendou is proficient in handling any weapon, especially dagger and gun), Stealth Mastery (Tendou is able to sneak up on trained ZECT agents and can leave without a trace), Enhanced Senses (The Kabuto Receiver gives him the ability to hear sounds in the range of 16 Hz to 120 thousand Hz, and can even hear a needle falling 5 km ahead. O Signal can sense the disturbance of the space-time and inform Kabuto of said disturbance. Compound Eye has a field of view capable of instantaneously identifying targets 2 km away and covering a wide angle of 130 degrees in all directions. Moreover, enemies can be identified through fluoroscopy with X-rays, neutron rays, and infrared rays even in the cover of darkness), Statistics Amplification with Clock Up (It boosts his speed greatly), Time Travel with Hyper Clock Up (By moving at speeds that are estimated to be twice as fast as a regular Clock Up, Kabuto can travel through time), Portal Creation with Hyper Zecter (Allows the user to open an entrance to the edge of space/time, however this is uncontrollable), Energy Manipulation with The Perfect Zecter

Attack Potency: At least Athlete level (He can matched aganist trained ZECT agents and beat up low Worms with ease) | Small Town level (His kick can produce this much of energy) | Large Country level (Able to push a meteor far larger than himself.)

Intelligence: High (He is a skilled fighter even able to outmatch ZECT agents with ease and a capable leader when the situation requires, he once leads the Shadow troopers into victory against Worms. He also a talented battle tactician, manage to catch the Cassis Worm - who has the ability to freeze time - off-guard through various tactics.)

Weaknesses: Normal human weakness | The Masked Form had better defence capability but much slower. In Rider form, Clock Up have time limit.