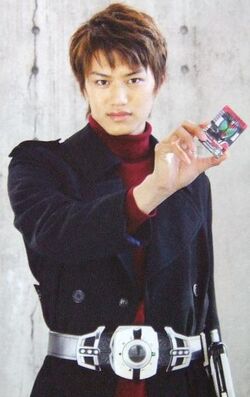 Tsukasa Kadoya (門矢 士 Kadoya Tsukasa) is a hypocritical and self-righteous traveler who is often accused by Narutaki (and sometimes refers to himself) as The Destroyer of Worlds(世界の破壊者 Sekai no Hakaisha). To accomplish this goal, he transforms into Kamen Rider Decade (仮面ライダーディケイド Kamen Raidā Dikeido, Masked Rider Decade) in order to restore his missing memories and bring balance to the Rider Multiverse. However, learning he was originally the leader of an interdimensional syndicate called Dai-Shocker, Tsukasa learns he is meant to destroy the A.R. Worlds and its Kamen Riders. Tsukasa accepts that role so that his death would be the catalyst to undo the convergence of the nine A.R. Worlds before being revived by his friends' memories of him. Since then, Tsukasa continues his journey across the multiverse. Since the end of this particular journey, he has spent the last decade observing the main universe of Kamen Rider and determining whenever it should be destroyed or not.

Classification: Dimension Traveler, Leader of Dai-Shocker (Former), Destroyer of Worlds (Former), many other jobs depends on realities he goes (when he travel to alternate realities, he took the roles within it, such as police officer, violinist, lawyer, and many others)

Superhuman Physical Characteristics, Martial Arts expert, Weapon Mastery, Portal Creation (With dimensional wall, can be used to travel to parallel universes and travel through time), Reality Warping (Uncontrollable), Existence Erasure (Uncontrollable), Resurrection (If people still remember him, he can recreates his existence), Acausality (Unaffected by the changes Sougo's adventures have caused, including having the knowledge and powers of Riders who've already been erased from time and history like Build and Wizard), Power Nullification (Nullify the power of Ghost Ridewatch)

All previous powers, Invisibility (Can turns invisible), Duplication (Can duplicate 3-6 copies of himself that are identical to him and can use his abilities), Shapeshifting (Can turns into other Kamen Riders), Transformation, Energy Manipulation (Most of his weapons has energy-based attacks), Statistics Amplification (Can amp his attacks to greater extent, such as Dimension Kick, Dimension Slash and Dimension Blast, which strong enough to one-shotted enemies that overpowered him), Super Speed (with Clock Up card), Fire Manipulation (With many of his cards), Technology Manipulation (Machine Decader can assume the form of the respective Rider's motorcycle), Can kill immortals (Can kills undead, which cannot be killed unless seal them), Can enters Mirror World, Breaking the Fourth Wall, Power Mimicry (Can copy powers with his cards), BFR (Can send his enemies into a dimensional rift), (See full list of Rider Cards), Spatial Manipulation (His Rider Card Holder is an infinite holder of Rider Cards, due to connection with the Klein Bottle), Enhanced Senses (Vision 8 times better than a normal person, thanks to data sent from 1,500,000 photoreceptor cells and can distinguish 25 moving objects up to 40kms. Also has night vision function, able to polarize light to convert infrared rays reflected by objects into visible light. This is a preliminary requisite to explore parallel worlds. Able to detect even frequencies of 14Hz and detect sounds from a distance of up to 10 km), Dimension Manipulation (His DecadeDriver is able to release the energy from the Rider Cards thanks to a dimensional conversion machine, which transforms the 2d data into 3d), Paralysis Inducement (Can transform into Kamen Rider Hibiki and use Hibiki's finisher, which can completely paralyze enemies and repeatedly strikes them)

Can combine all of base form powers, and upgrade them to higher extent, plus Flight, Homing Attack

Attack Potency: Unknown (Fight against many Kaijins and done something far stronger than human could've done on multiple occasions). Likely Low Multiverse level (His presence can cause a major distortion in a world, being the indirect cause of at least 9 parallel universes gradually merging. Accidentally erased Kiva and Hibiki along with their universes. His death can also restored the multiverse), possibly Multiverse level with Reality Warping and Existence Erasure (Stated by Narutaki that he will destroy all universes, which is countless in number, and each universe branching off other universes) | Island level (Fought against Exceed Gills), higher with Dimension Kick, Dimension Slash and Dimension Blast. | Solar System level (Fought all Heisei Riders, including Kuuga Ultimate Form and Black and RX), higher with Dimension Kick, Dimension Slash and Dimension Blast.

Speed: Unknown with Sub-Relativistic reactions (Can see any ZECT Riders when they are in Clock Up) | Massively Hypersonic movement speed with FTL reaction speeds

Stamina: Superhuman | High (Kept up with every Heisei Riders)

Range: Extended melee to hundreds meters with projectiles and abilities, Varis depending on which Riders he transform into. Low Multiversal, possibly Multiversal via Reality Warping and Existence Erasure

Intelligence: Genius. He is very calculating, cunning and manipulative, he became Leader of Dai-Shocker when he was young, outsmarted many villains, easily manipulates Dai-Shocker and Zangyack alongside Captain Marvelous. Very quick at infiltrating a parallel worlds with limited information on those realities, which led him to solve many problems.