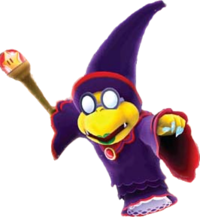 Mainly fought while on ships, Kamella is a reccuring boss in Super Mario Galaxy.

Attack Potency: Large Star level (Fought with the Mario Bros. Her wand is powered by a Power Star)

Speed: Massively FTL+ (Can keep up with the Mario Bros)

Standard Equipment: A magical wand powered by a Power Star

Weaknesses: Her Koopa shells can be used against her

Retrieved from "https://vsbattles.fandom.com/wiki/Kamella?oldid=5877592"
Community content is available under CC-BY-SA unless otherwise noted.