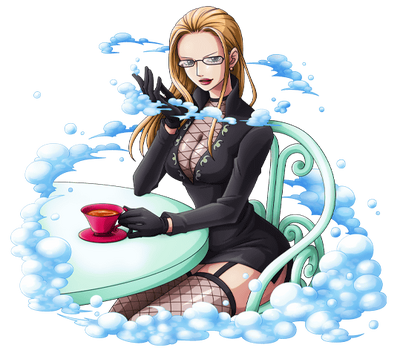 Kalifa was first introduced as being Iceberg's attendant at Water 7, when in reality, for the 5 years she had been working with Iceberg, she was a spy working as a CP9 member that was tasked with finding the blueprints regarding Pluton.

She assisted in kidnapping Robin and Franky and returning them to Enies Lobby. Both would be turned over to the World Government and use them to read the Poneglyphs and to build Pluton. However Monkey D. Luffy and his crew showed up in front of the Tower of Justice, where Robin claimed her desire to live. After this, Robin was taken away while most of the members of CP9, including Kalifa, were tasked with protecting various keys (one being for Robin's cuffs) while also exposing of the Strawhats.

Taking advantage of Sanji's chivalry, Kalifa easily defeated him, but was later beaten by Nami.

She escaped Enies Lobby alongside the rest of CP9, but her current whereabouts are unknown.

Powers and Abilities: Superhuman Physical Characteristics, Whip User, Absolute mastery with Rokushiki, Acrobatics, Social Influencing (Uses her sex appeal to deceive enemies), Pseudo-Flight (via Geppo), Statistics Amplification (via Soru and Tekkai), Body Control and Damage Reduction (via Kami-e and Tekkai), Air Manipulation (via Rankyaku), Bubble Manipulation (Can generate and controls bubbles and water with her Devil Fruit ability), Transformation (via Soap Sheep), Statistics Reduction (Her fruit allows it to "wipe" everything from dirt to the strength of the opponent; Those who make contact with her soap will have their strength reduced to a point that they can not even stand), Forcefield Creation (via Soap Armor), Transmutation (Can turn others into extremely smooth beings after touching them)

Attack Potency: Town level (Excluding Spandam, Kalifa is the weakest of CP9, but she is not far weaker than Blueno with her Doriki being 630)

Speed: Massively Hypersonic+ (Reacted to and defended against lightning from a few meters away while caught off guard, faster than Nami), higher with Soru

Striking Strength: Town Class (Sent Water 7 Luffy flying with a Rankyaku, though she had help from Kaku at the time)

Stamina: Very High (Trained assassin, and did not show the slightest level of fatigue from her fights against Sanji and Nami until she was defeated)

Intelligence: Very High (She is a skilled spy, as she worked directly under Iceberg for 5 years without being discovered. She learned how to expertly utilize her Devil Fruit Power despite only having it for at most an hour before engaging Sanji and Nami in combat)

Weaknesses: Standard Devil Fruit User weaknesses. Her ability is notably weak against water, as her soap bubbles get washed away.

Thorned Whip: Before the Straw Hats reached Enies Lobby, Kalifa wielded a few notched whips. A single thorned whip, and two thorned whips that each divide up to several tendrils. She can use this weapon to whip, gash, cut, and even grapple opponents or objects.

Awa Awa no Mi (Bubble-Bubble Fruit): Kalifa has the power to create bubbles, using them as a weapon and a shield against attacks. She can use bubbles that drain the strength of her opponents.