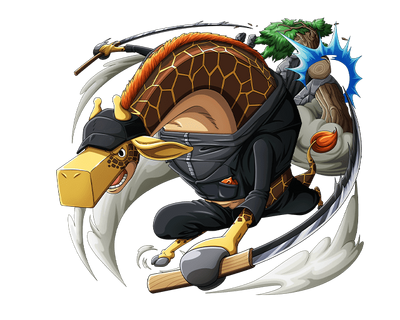 Kaku is one of the Elite members of the Cipher Pol Number Nine and second only to Lucci, and is also the youngest. Has a peculiar, "squared body" and a very long nose, similar to Usopp’s. He too can use the Rokushiki and is a master of Rankyaku, to the point that he's developed the Yontoryuu (Four-swords style) using two katanas and his legs. He also has eaten the Cow-Cow Fruit (Ushi Ushi no Mi), Model: Giraffe and can turn into a Giraffe-man, but despite his ridiculous appearance, he's still as powerful and dangerous if not more so.

He's first seen as one of Galley-la Company's best shipwrights, and is the one who tells the Straw Hats that the Going Merry is beyond repair, until he's revealed to be an undercover spy for the World Government. Then he goes to Enies Lobby along with the other undercover agents, where he eats the Cow-Cow Fruit, Model: Giraffe and later fights Zoro. After a long and intense fight, the three-swords swordsman wins and Kaku gracefully gives him his key, revealing it's the one that opens Nico Robin’s handcuffs.

After the events of Enies Lobby, he's kicked out of CP9 and, with his ex-colleagues, he collects money to heal Lucci and swears revenge on Spandam.

After the time-skip it is revealed that he has become a member of CP0.

Powers and Abilities: Superhuman Physical Characteristics, Excellent Swordsman, Acrobatics, Afterimage Creation, Absolute mastery with Rokushiki (He has mastered all six styles of Rokushiki. Encompasses versatile combat techniques), Large Size (Type 0, in his Zoan forms variations), Transformation and Natural Weaponry (Ate the Ushi Ushi no Mi, Model: Giraffe, a Zoan-class Devil Fruit, which allows him to transform into a giraffe-human hybrid and a full giraffe. He tends to utilize the long neck granted by his Devil Fruit in combat), Enhanced Senses (Zoan users gain the senses of their respective animal), Pseudo-Flight (via Geppou), Body Control and Damage Reduction (via Kami-e and Tekkai), Statistics Amplification (via Soru and Tekkai), Air Manipulation (via Rankyaku), Limited Danmaku (via Rankyaku: Kiri Shigure) | Same as before, Haki (Armament and Observation)

Attack Potency: Town level+ (Overwhelmed Roronoa Zoro in Water 7 with casual effort. Has a Doriki of 2200, making him over double as powerful as Blueno in terms of physical abilities), higher in Zoan Form (Vastly stronger than his human form. Stronger than Enies Lobby Zoro and could matched his Shishi Sonson before he activated Asura) | Unknown

Durability: Town level+, far higher with Tekkai and Zoan Form (Shrugged off attacks from Zoro with minimal damage despite the latter being able to match Kaku’s physical might at some point. Tekkai allowed Kaku to no-sell his own Rankyaku: Kiri Shigure which could harm Zoro) | Unknown

Stamina: Very High (Has been specially trained to perform as an assassin, can jump from building to building from Water 7 to its coast without breaking a sweat, and survived a Buster Call after being defeated by Zoro)

Range: Extended melee range to several meters with swords (Upon his transformation into a giraffe hybrid form, his swords will grow in size proportional to himself), several meters with giraffe’s neck, up to hundreds of meters with Rankyaku (His strongest Rankyaku was able to slice through a whole entire tower)

Intelligence: Very high (Has deceived Iceberg when it comes to his identity for over 5 years, and became an exceptionally skilled shipwright in that time-frame. He is an accomplished assassin), though making fun of his appearance as a giraffe can cause him to lose his nerve