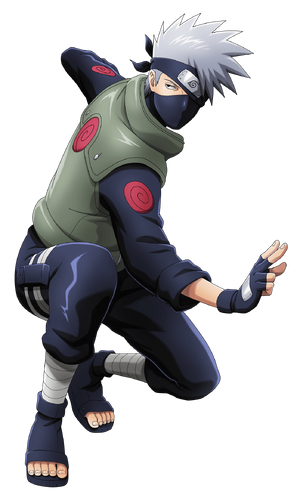 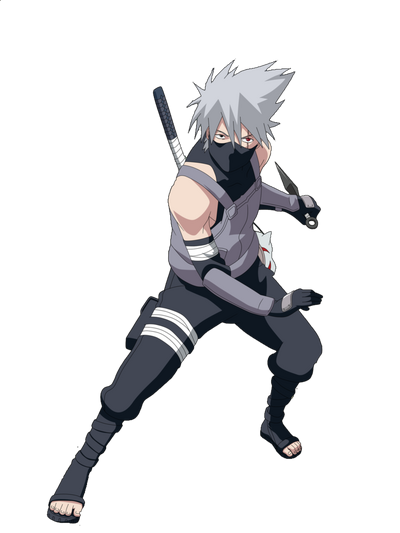 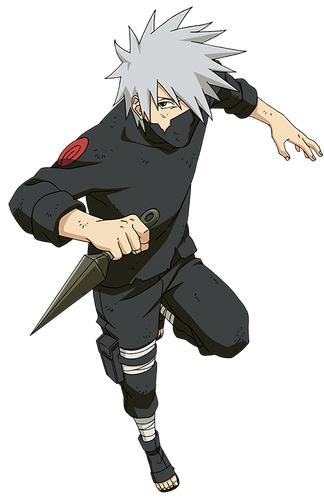 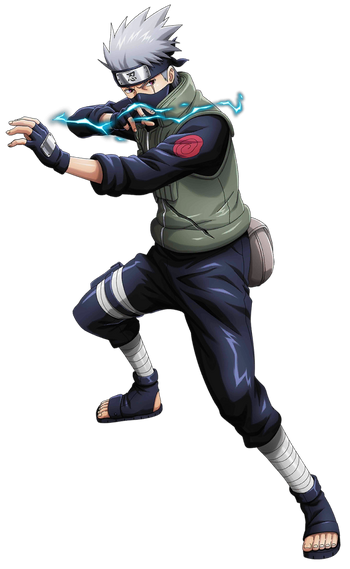 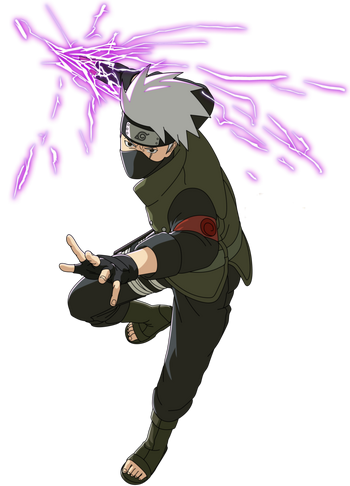 Kakashi Hatake (はたけカカシ, Hatake Kakashi) is a shinobi of Konohagakure's Hatake clan. After receiving a Sharingan from his team-mate, Obito Uchiha, Kakashi gained recognition as Copy Ninja Kakashi (コピー忍者のカカシ, Kopī Ninja no Kakashi) and Kakashi of the Sharingan (写輪眼のカカシ, Sharingan no Kakashi). His prodigious talent, skill, and Sharingan prowess have made him one of the village's most capable ninja, and as such, both highly renowned and feared throughout the ninja world. Later appointed the leader of Team 7, Kakashi used his years of experience to train his students as skilled shinobi in their rights. In the aftermath of the Fourth Shinobi World War, Kakashi takes up office as the Sixth Hokage (六代目火影, Rokudaime Hokage, Literally meaning: Sixth Fire Shadow).

Superhuman Physical Characteristics, Genius Intelligence, Chakra Manipulation, Surface Scaling, Water Walking, Expert Hand-to-Hand Combatant, Lightning Manipulation, Enhanced Smell, Sight and Hearing, Stealth Mastery, Explosion Manipulation with explosive tags, Speed Enhancement with Shunshin, Shapeshifting (Can transform into animate and inanimate objects), Can replace himself with inanimate objects in the vicinity to avoid damage, Weapon Mastery (Expert in the use of kunai, shuriken, and other ninja weaponry. As an adult, can channel lightning into them to further increase their sharpness, cutting power, and achieve effects such as paralyzing targets), Duplication (Can create shadow clones that can use his techniques. As an adult, can create lightning clones that can perform the same function, on top of paralysing opponents on contact, and water clones), Analytical Prediction (The Sharingan allows him to see the image of his opponent's next move from the slightest muscle tension in their body), Power Mimicry (Can copy the ninjutsu, genjutsu, and fighting styles of his opponents), Limited X-ray Vision (The Sharingan allows him to see chakra through solid obstructions), Illusion Creation, Mind Manipulation, Perception Manipulation, Can see camouflaged targets with the Sharingan, Information Analysis (The sharingan can look at the energy of a person to figure out what their attack they would use), Sealing (could seal Sasuke's curse mark with his blood), Resistance to Illusion Creation, Mind Manipulation and Perception Manipulation

All previous abilities, Water and Mist Manipulation, Earth Manipulation, Summoning (Can summon different weapons of varying sizes, and dogs that assist in tracking and espionage, and can restrain targets, leaving them open and vulnerable to attack)

Same as before, Teleportation, Dimensional Travel, Space-Time Manipulation, BFR (Can send targets to another dimension) with Kamui

Same as before, but does not have his Sharingan and Six Paths chakra, Afterimage Creation, Resistance to Ice Manipulation (Prevented ice from spreading through his body with the use of chakra control), Sealing (could still move despite being affected by seals from multiple genin)

Attack Potency: At least Small Town level+ (Able to become Jōnin at very young age; superior to Obito, who is stronger than Genin Naruto) | Town level (Superior to Genma Shiranui and Raidou, who were able to fight on par with Jirobo and the rest of Sound Four in their Cursed Mark-II states, which are this powerful. Stronger than Part 1 Sasuke even after his power-ups, and thus should be on this level. Scales to other powerful Jōnin like Asuma and Gai), higher with Raikiri (Casually one-shotted Zabuza Momochi, who could fight him on even grounds) | At least Town level, higher with Raikiri (Stronger than his pre-time skip self). Kamui ignores conventional durability | At least Mountain level+ (Could cut V2 Jinchūriki with Lightning Cable and fight on par with Obito Uchiha). Kamui ignores conventional durability | Multi-Continent level with Perfect Susanoo via powerscaling (His Perfect Susanoo should be comparable to EMS Madara's, as he possesses Six Paths chakra). Kamui Shuriken and Kamui Raikiri also negate durability | At least Mountain level+ (Was stated to be comparable to the other Kage of the time and shouldn't be weaker than he was during the Fourth Great Ninja War)

Speed: At least High Hypersonic (A ninja from the Hidden Stone Village complimented his speed and was able to briefly fight others from the same village even without a Sharingan; superior to Genin Sasuke) | Massively Hypersonic+ (Comparable to Kabuto Yakushi) | Massively Hypersonic+ (Intercepted a lightning bolt from Kakuzu at point-blank range. Kept up with people like Deva Path, accurately tracked and disabled a speeding missile from Asura Path, and an explosion from Deidara. He was also able to match a clone containing over 30% of Itachi Uchiha's chakra) | Sub-Relativistic (Intercepted an attack from White Mask Obito and kept up with him. Can keep up with 6th Gates Guy, Kurama Chakra Mode Naruto and Version 2 Jinchūrikis) | FTL (Much faster than before as he attained DMS and Six Paths chakra, can keep up with Kaguya Ōtsutsuki) | Sub-Relativistic (Should not be slower than he was during the Fourth Shinobi World War)

Durability: At least Small Town level+ (More durable than other Genins) | Town level (Fought Zabuza Momochi evenly, should be far more durable than his genins and at least sturdier than Genma Shiranui and Raido, who fought the Sound Four. Kabuto Yakushi, who was stated to be comparable to him in prowess, could take attacks from Tsunade and Sai) | At least Town level (Tanked a blast of Shinra Tensei, and was capable of receiving blows from Kakuzu who could match his attacks) | At least Mountain level+ (Took an attack from Version 2 Utakata) | Multi-Continent level with Perfect Susanoo (Should be comparable to EMS Madara). Kamui allows him to phase through incoming attacks | At least Mountain level+

Stamina: Very high and typically limited at first (Kakashi may tire quickly if he overuses his Sharingan and could die from three usages of his Mangekyō Sharingan), his stamina improved drastically later during the Fourth War. He was shown using multiple chakra-taxing techniques, with the addition of using his Mangekyō Sharingan continuously, which takes a large amount of chakra and causes debilitating effects on the eyesight of even natural Uchiha. He also recovered rather quickly, only showing signs of blindness after two days, and was not bothered by fighting with broken bones and arms.

Intelligence: Genius. He became a chuunin six years younger than Naruto, has been referred to as a genius by many, including himself, and has been stated to be comparable to Shikamaru.

Weaknesses: Kakashi can't deactivate his Sharingan at will; thus, he's forced to cover it with his headband to conserve chakra when it's not in use. Kakashi can't copy techniques that he is physically incapable of performing, restricting his copying prowess to chakra-based moves any ninja can perform. | Kakashi can be very tired after he uses Kamui, once he was in bed for ten days, though this weakness has been lessened to an extent throughout the events. His intangibility only lasts for five minutes when continuously activated. After the Fourth Shinobi World War, he no longer possesses the Sharingan.

Sharingan (Mirror Wheel Eye): The first of the Sharingan's powers is being able to see the flow of chakra. The Sharingan itself gives color to chakra, allowing the wielder to differentiate them. The Sharingan's second-most prominent ability grants the user an incredible clarity of perception, allowing the user to pick up on subtle details. As the Sharingan evolves, this ability extends to being able to track fast-moving objects before finally giving some amount of predictive capabilities to the user, allowing them to see the image of an attacker’s next move from the slightest muscle tension in their body. The Sharingan's third and most well-known ability is that it grants the user the ability to memorize almost any technique that he or she witnesses. The Sharingan's final commonly-used ability is capable of inducing a unique brand of hypnosis that involves suggesting actions and thoughts to the opponent through genjutsu cast by simple eye contact between both parties.

Raiton (Lightning Release): One of the basic elemental nature transformation techniques that allow the user to generate lightning by increasing the high-frequency vibrations of their chakra, allowing for piercing damage and fast movement. The electricity paralyses the target so that they are unable to move and leave them vulnerable to a finishing strike. While uncommon, lightning can be infused into bladed weapons in a way similar to Wind Release through chakra flow for increased the piercing power through vibrations, with the added effect of inducing numbness.

Doton (Earth Release): One of the basic elemental nature transformation techniques and allows the user to manipulate the surrounding earth for offensive and defensive purposes or create it, be it dirt, mud, or rock.

Suiton (Water Release): One of the basic elemental nature transformation techniques and allows the user to manipulate and shape surrounding water or create water without a source, such as projecting it from the mouth.

Kage Bunshin no Jutsu (Shadow Clone): Kakashi creates a clone(s) of the user able to perform techniques and interact with the environment due to it having physical substance; and also evenly distributes the user's chakra to each clone. If the clone is injured, the clone will disperse.

Genjutsu (Illusionary Techniques): Illusory techniques that are employed with chakra and hand seals. Genjutsu techniques manipulate the flow of chakra in the victim's brain, thus disrupting their senses. 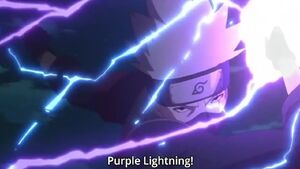