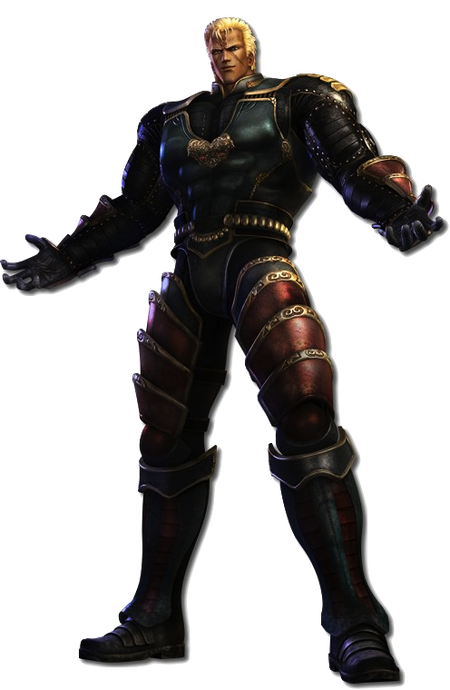 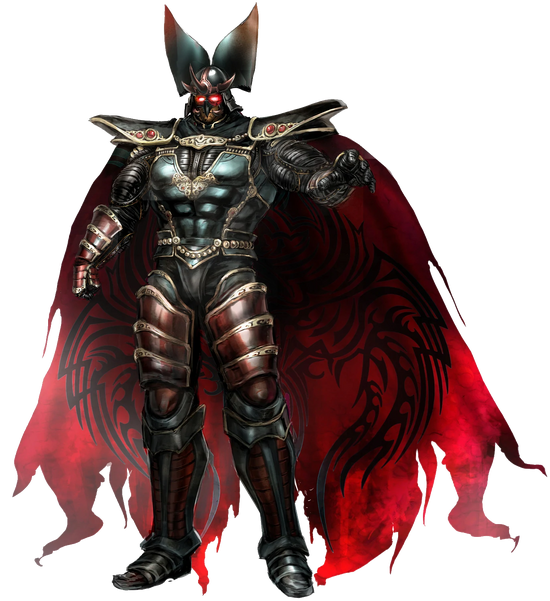 Kaioh is the First Rashō who rules of Asura, referred to as the "Creator of a New Century". A descendant of the original Hokuto bloodline, he is the elder brother of Raoh and Toki, who he was separated from at birth. As opposed to his siblings, he learned Hokuto Ryū Ken, a more destructive style of Hokuto that grants great destructive strength at the expense of the user's sanity. After his mother sacrificed her life to save a baby Kenshiro, Kaioh swore off his emotions due to the great sorrow he felt, punishing every emotion he felt with pain. Kaioh is the final and strongest of Kenshiro's many rivals.

Powers and Abilities: Superhuman Physical Characteristics, Master of Hokuto Ryū Ken, which allows him to target and hit someone's pressure points for various purposes (Mostly in the form of causing them to explode or manipulating their movements), Chi Manipulation, Possesses an aura that absorbs chi, making his opponents weaker and weaker as they fight, Memory Manipulation (Can erase and alter memories by hitting pressure points), Telekinesis (Can levitate and throw his enemies and objects using his aura and can heavily disorient them through this with Anryū Tenha), Self-Sustenance (Type 1. Does not need to breathe), Battle Precognition (Hokuto Ryū Ken allows users to anticipate attacks through reading people's auras), Power Nullification (Can overpower and negate techniques such as Musō Tensei with his aura), Regeneration (Low-Mid), Limited Spatial Manipulation via Anryū Tenha (Can bend space around himself to avoid attacks or distort space around an opponent to disorient them and trap them in a weightless space, can distort the distance between himself and his opponent and control the arena and atmosphere), Biological Manipulation (Knows a pressure point technique that disrupts a persons biological functions, making it appear as though they have died of a sickness), Forcefield Creation (Can use his aura to block attacks and even cause his aura to explode to attack his attacker), Resistance to Electricity (Should be comparable to Liu Zongwu), Heat Resistance (Should be comparable to Liu Zongwu), Resistance to poisons and pressure points

Speed: At least Massively Hypersonic, likely far higher in 100% Mode (Was able to fight on equal footing with a serious unsealed Kenshiro)

Stamina: Extremely high (Can fight for long periods with Kenshiro in an incredibly harsh, volcanic area. Has had his legs, arms, and muscles torn and crushed, and continues to fight and recovers all of it. Should be on Par with Kens)

- Hokuto Ryū Ken: Hokuto Ryū Ken is a 1, 800 years old Chinese martial art, a rival style to Hokuto Shinken. Its power is based around targeting and hitting the 1, 109 Keiraku Hakō (or pressure points), as opposed to the 708 Keiraku Hikō manipulated by Hokuto Shinken, in an opponent's body, channeling energy into them, and through that, manipulating their movements. These pressure points can be used to control an enemy's body, in ways such as forcing them to move or destroying them from the inside with an explosion, or they can be used for healing, such as in the restoration of someone's memories, eyesight, or voice. Hokuto Ryū Ken also grants the user to the power of the Matōki, an aura that absorbs chi and increases their strength at the expense of their own sanity.

- Hokuto Sōke no Ken: The original martial art of the Hokuto line.