VS Battles Wiki
Register
Don't have an account?
Sign In
in: Characters, Touhou Project, Aliens,
and 23 more 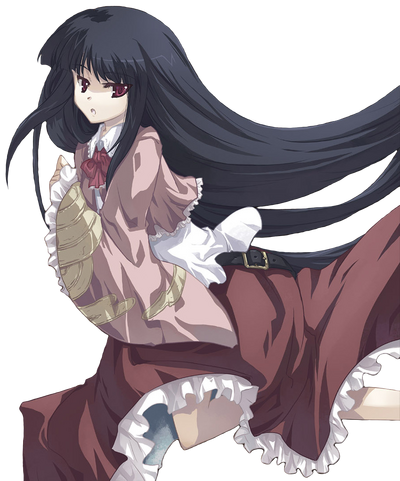 Kaguya Houraisan (蓬莱山 輝夜, Houraisan Kaguya) is the former princess of the Moon, banished to Earth for consuming the Hourai Elixir to become immortal. There, she dwelt among the humans and eventually grew to love her new home. Her beauty attracted many suitors, but she refused to marry any of them if they failed to accomplish one of her Five Impossible Requests. Eventually, when the Lunarians forgave her and attempted to retrieve her, she rejected Lunarian society in favor of Earth and escaped with Eirin Yagokoro to the hidden mansion of Eientei.

She is based on a character from a 10th-century Japanese folk-tale, The Tale of the Bamboo Cutter.

Powers and Abilities: Superhuman Physical Characteristics, Flight, Immortality (Types 1, 3, and 5. Hourai immortals no longer possess a concept of life and death), Regeneration (Low-Godly), Danmaku, Eternity Manipulation (Can apply "eternity" onto anything she wishes, preventing those affected from undergoing any change and essentially freezing them in time indefinitely, and she can cause things to happen instantaneously), Spatial Manipulation (She was able to use her powers to create a neverending corridor), can perceive multiple timelines at once, Non-Physical Interaction (Can harm Phantoms and Evil Spirits with her regular attacks), Dimensional Travel (Can break through Otherworlds), Enhanced Senses (Has smell superior to a dog's. Can smell death), Resistance to Soul Manipulation (The Hourai Elixir seemingly makes the soul invincible), Death Manipulation (Can resist Yuyuko's attempts at killing her), Mind Manipulation (Lunarians are immune the effects of the true Moon, which can drive humans insane and kill them if they look at it) and Probability Manipulation (Kaguya has so much fortune that it cannot be reduced),

Speed: Massively FTL+ (Comparable to other high tiers such as Reimu)

Stamina: Very high. Kaguya is capable of fighting for hours against Mokou and has a very strong will, allowing her to fight against, kill, and be killed by Mokou over and over again on a near-daily basis. However, she has a problem with doing physical activities due to a lazy nature

Range: At least Tens of Meters with Danmaku (Her firing range should be comparable to Sakuya's, who can throw knives at least 36 meters), Planetary with Eternity Manipulation (Broke the eternal night in Imperishable Night, which stopped the Moon from setting), further with Instant Manipulation (Kaguya seemingly exists within and perceives multiple timelines at once)

Standard Equipment: Her 5 impossible requests; a jeweled branch, the jewel from a dragon's neck, a robe made out of fire rat fur, Buddha's stone begging bowl and a legendary cowrie shell

Intelligence: While Kaguya is somewhat lazy, she is still fairly intelligent, and may have more extensive knowledge due to being around Eirin and thriving within Lunarian society

Weaknesses: Kaguya is lazy and has little experience in hand-to-hand combatant