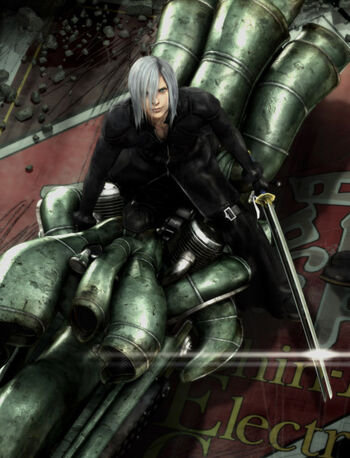 Created as an extension of Sephiroth's will after his defeat in the Planet's Core, Kadaj was born as a puppet to find Jenova, his "mother" to make possible a new Reunion and allow a new coming for Sephiroth in the mortal world. For this purpose, he works alongside the other Remnants, Yazoo and Loz, to search for Jenova's remains.

Cunning and ruthless, Kadaj also has a grudge with his older brother through Jenova, Cloud Strife, upset on how he has "betrayed" his family among those carrying Jenova's legacy. This will lead to several confrontations between both of them in their race for Jenova's remains.

Powers and Abilities: Superhuman Physical Characteristics; Master Swordsman; Acrobatics; Enhanced Awareness and Reflexes; Mind Reading and Memory Reading (Kadaj can thoroughly scan the mind and consciousness of people by touching them, a limitation Jenova or Sephiroth didn't have); Perception Manipulation (another ability inherited from Jenova, Kadaj can appear to others as someone from their memories, tricking their senses to be perceived as said person. If different individuals see Kadaj at the same time, the person who is not familiar with a person he's masquerading as will see his true form); Fear Manipulation (unless porpusedly masking it, Kadaj's presence has been noted to be unnerving and give the feeling of "death" drawing near); Pain Manipulation and minor Biological Manipulation (Kadaj can heal wounds and take away pain from a person, through physical contact, and give them back whenever he wishes); Telekinesis (Kadaj has moved object with his mind, like Sephiroth did); Teleportation (As shown in his pursuit of Evan and Kyrie, and his encounter with the Turks, Kadaj can repeatedly teleport several dozens of meters); Mind Manipulation (can influence those with Jenova Cells, such as those with Geostigma); Summoning (of Shadow Creepers and Summoned Beasts, the latter via Materia); Disease Manipulation (the Shadow Creepers can infect people with Geostigma when hurting them); Shapeshifting (can turn into black mist); Creation (his clothes and weapons are actually materialized from Negative Lifestream); Magic (via Materia); Fire Manipulation and Lightning Manipulation; Radiation Manipulation, Matter Manipulation and Durability Negation (via Bahamut SIN and its Petaflare attack, which is a stronger variant of the Flare spell, which creates a nuclear blast); Non-Corporeal (like his brothers, Kadaj is an extension of Sephiroth's will made out of Negative Lifestream; thus his interaction with physical objects occurs when he wishes to). Resistance to Mind Manipulation, Soul Manipulation, Soul Absorption, Memory Manipulation and Empathic Manipulation (after his first defeat in The Kids Are Alright: A Turks Side Story he was diffused by the Lifestream, however, his will, individuality and desire to find Jenova remained, and he managed to come back shortly after during the events of Advent Children); Disease Manipulation, Corruption (Types 2 and 3, being made of Negative Lifestream, Kadaj is not affected by corrupting energies nor effects that corrupt at a biological level); Death Manipulation (wasn't instantly killed by the impact of Cloud's Finishing Touch).

Attack Potency: Solar System level (As a Remnant, Kadaj is an extension of Sephiroth's will. Could match and overwhelm a Geostigma infected Cloud when fighting him alongside Yazoo and Loz when the three of them were even toying around. Managed to hold his own for a bit against a full-strength Cloud, but was quickly defeated by his Finishing Touch) | Solar System level (Its attacks were considered incredibly dangerous by the party and, aside Cloud towards the end, their only choice was to avoid them)

Speed: Massively FTL+ (Could easily keep up with with Cloud when the latter was infected with Geostigma, and even after he was cured of it, despite being defeated) | Massively FTL+ (Managed to more or less keep up with all the party at once, and can follow each member by themselves without that much difficulty)

Lifting Strength: Possibly Class G, (Should be comparable to Loz who could overwhelm Tifa Lockhart in their fight) | At least Class G due to sheer size, likely higher (Though the party had grown weaker, Bahamut SIN was still a juggernaut that could barely be stopped by force)

Durability: Solar System level (Survived Cloud's Finishing Touch, though he was instantly disarmed and defeated by it) | Solar System level (Endured a constant assault of attacks of the entire party, and while his armor was gradually damaged, he was mostly unfazed outside of their Limit Breaks)

Stamina: High. Despite fighting several powerful opponents in a very short period, and putting his plans into motion, which involved draining actions such as Summoning and long travels, he never looked the least bit tired and treated the whole affair as if it was a game. | Very high. Despite taking on the entire party at once, for roughly two hours, and taking a high number of attacks, it never even slowed down until its defeat at Cloud's hands.

Intelligence: High. Despite his very young age and unstable nature, Kadaj has shown to be very astute with his plans and a very competent fighter who can expertly work with his brothers.

Weaknesses: Kadaj is quite wild and unstable. While he can be cunning and pragmatic, he is, in many ways, a young boy and can lose control when under emotional stress, leading to violent outbursts. Due to being made of Negative Lifestream, Kadaj is very vulnerable to Purification, as seen with his brief exposure to Aerith's Great Gospel, causing him great pain.

Notable Attacks/Techniques: As an extension of Sephiroth, Kadaj has also inherited abilities from Jenova, as acknowledged by Tseng. The Remnant uses these abilities to manipulate and instill fear on his targets and occasionally in combat. During the events of Advent Children, his brother Loz managed to steal Cloud's Materia, allowing Kadaj to access to several magic abilities and the power to call forth Summons:

Retrieved from "https://vsbattles.fandom.com/wiki/Kadaj?oldid=5972700"
Community content is available under CC-BY-SA unless otherwise noted.