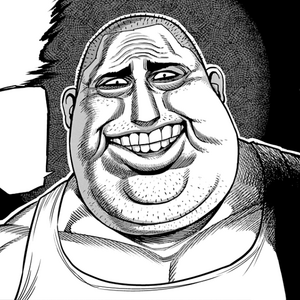 Kaburagi Koji, also known as the Medicine Man, is an affiliated Kengan fighter that represents Koyama Mart, Inc. Whenever he fights, his primary outcome is to eliminate potentially dangerous fighters, thus Kaburagi is known as the "fighter who hunts fighters". Kaburagi understands the limits of his own powers and thus finds immense gratification in bringing down superior fighters using his underhanded tactics. He finds pride in his ability to conceal debilitating substances and 'weapons' from the unsuspecting eyes of the referee and audience, boldly sticking to his "path of perversion". However, Kaburagi is a coward who will cry uncle when his plans do not come to fruition.

Attack Potency: Small Building level+ (Made Ohma bleed from his punches and defeated several Guardians and they gave Hajime and rest of the Annihilation Tournament fighters a hard time)

Stamina: Very high. Able to fight while having injuries and able to fight multiple Guardians while protecting the CEOs.

Intelligence: Above Average. Managed to trick Hayami to betray him and protect the CEOs during his Coup. Has extensive knowledge on medicine and sound technology.

Weaknesses: Kaburagi is extremely cowardly and cry for his uncle when his plan doesn't go out on his way.

Retrieved from "https://vsbattles.fandom.com/wiki/Kaburagi_Koji?oldid=5570466"
Community content is available under CC-BY-SA unless otherwise noted.