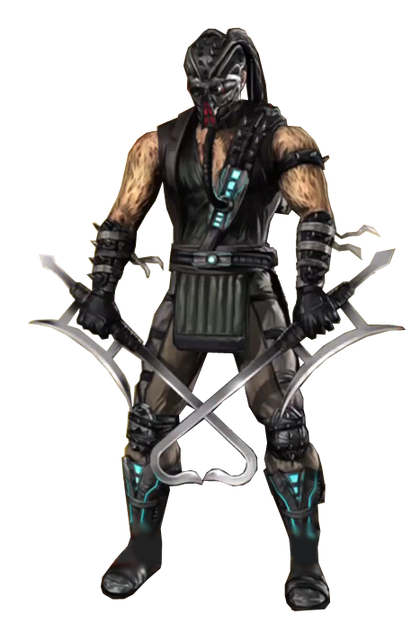 Kabal was a loyal Operative of the Black Dragon clan, which abandoned his life of crime and put his fighting skills to more positive use. In original timeline he witnessed Shao Kahn stealing souls from Earthrealm and was later heavily scarred by his extermination squads. In the current one, he became a police officer and Kurtis Stryker's partner, during the Outworld invasion he is severely burned by Kintaro, which left him to wear a life support system.

Fleet-footed Black Dragon enforcer. Kabal's sprinting speed is only outpaced by his greed. He was a rookie cop until Kano tempted him to sell out his police department for cash money and a spot in the Black Dragon. Kabal has run down anyone who's crossed Kano ever since.

Superhuman Physical Characteristics (Possesses superhuman strength allowing him to rip armored opponents in half, lift people with hook swords, send people flying with his attacks, crush skulls, etc.), Martial Arts (Sun Bin and Goju Ryu), Weapon Mastery (Dual wields hook swords and his customized buzzsaws), Acrobatics (Exercises enhanced condition. Can do jump kicks and back flips. Can also jump while in mid air), Magic (Kabal states that his speed comes from Outworld's magics, with the magic being Shao Kahn's soul transfer spell), Superhuman Speed (Can run so fast, he disappears when dashing in short bursts or running several meters, make sonic booms or afterimages and spin his enemies), Energy Projection (Able to fire purplish orbs from his mask), Telekinesis (Can drag enemies towards him), Breath Attack (Can spit out lethal vapors capable of melting flesh. Can emit vapors from his gas canister to propel himself to the air or cover himself in it ), Teleportation (Here), Air Manipulation (Creates air cuts), Resistance to Poison and Corrosion Inducement (Unaffected by his own gas)

Attack Potency: Large Building level (Defeated an enslaved Cyber Sub-Zero and Sheeva, with the latter being able to survive this)

Speed: Subsonic with Supersonic+ reactions and combat speed (Can move fast enough to disappear in short bursts. Reacted to automatic bullet fire from gun resembling the M4 Carbine. Commented that he was faster than before after trying out his powers)

Lifting Strength: At least Class K (Can rip out heads and tear people in half)

Durability: Large Building level (Took a hit from Jax's metal arms which is twice as strong. Survived a tongue slap from Reptile)

Weaknesses: After being burnt by Kintaro, he cannot breathe without his breathing device. However, his past self does not have this weakness. 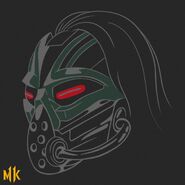 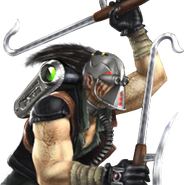 Revenant Kabal with the others in MKX.

Kabal's face shield, respirator and gas tank.
Add a photo to this gallery

Cutting Loose.
Add a photo to this gallery