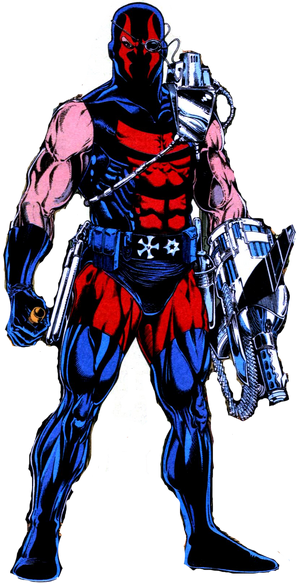 Trained by a top-secret cell of the KGB known as The Hammer, Anatoli Knyazev was an assassin known to the C.I.A. as the KGBeast. Having over 200 kills in his debut he was sent to America by The Hammer to assassinate 10 U.S officials, one of which was to visit Gotham City. This caught the Batman's eye and after battling twice the Beast cut his left arm off after it was restrained by the Batrope. He had his left arm replaced with a cybernetic gun, but in their 3rd battle Batman destroyed the gun arm and trapped him in a sewer where, he was later captured by police. Despite this, Anatoli escaped and became a recurring enemy of Batman, until he was killed by Tally Man under orders by Great White Shark.

Attack Potency: Small Building level+ (Has fought against and is comparable to Batman)

Lifting Strength: Peak Human (Casually lifted a 500-pound can that was this heavy twice)

Durability: Small Building level+ (Survived falling 30 stories off a building and being slammed hard enough to dent concrete, has been mostly unaffected by shotgun fire)

Stamina: Very high, kept fighting after his eye was ripped out.

Standard Equipment: A prosthesis on his left hand that can be switched into a retractable sword, a machine gun or a micro-rocket launcher. Also carries nunchaku, a sniper rifle, and brass knuckles.

Retrieved from "https://vsbattles.fandom.com/wiki/KGBeast_(Post-Crisis)?oldid=6620372"
Community content is available under CC-BY-SA unless otherwise noted.