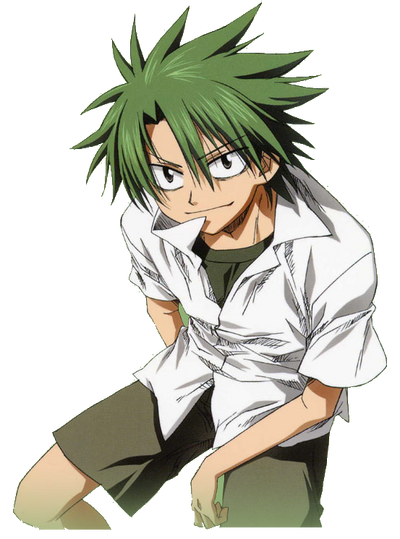 Kōsuke Ueki (植木 耕助 Ueki Kōsuke) is the main character of The Law of Ueki series. He is in class 1-C of Hinokuni Junior High School and the leader of Team Ueki. Kosuke initially met his adopted family after he was sent down to Earth from the Celestial World by Pag, Kosuke's biological father, with the intention of enrolling his son in the Battle of the Supernatural Powers, in hopes of becoming the next celestial king.

When Kosuke was in grade school, he was playing and showing off to his friends by balancing on top of a building, only to lose his balance. Fortunately for Kosuke, he was saved by Kobayashi in the nick of time.

When Kosuke and Kobayashi meet again, he pretended not to remember him, as he didn't want to owe Kobayashi anything. When Kobayashi's destroy a tree to demonstrate his power, Kosuke asked if there was a way to revive the tree. Kobayashi nods and gives Kosuke the power to turn trash into trees.

All previous abilities, Can use several kinds of Sacred Weapons

All previous abilities, Attack Reflection with Guliver, Can utilize his inner power to perform powerful attacks, Some skills on hand to hand combat, Statistics Amplification, Power Nullification with Level 2 power

Attack Potency: Large Building level+ (Fought and destroyed giant Clayman from Kurokage, which normally generate this much of power) | At least Town level, likely higher (While on weakened state from being exhausted and had several wounds, he is able to one-shot Don who can do this.) | Island Level (Fought and defeated Grano who vaporized a mountain) | At least Island level (On par with Anon), higher with Maoh (His Maoh completely obliterated Anon's Maoh and later one-shot him)

Stamina: Very high (Able to fight a defeat strong opponent after being exhausted and had several wounds from 24 hours testing in Awakening Chamber without eating and resting)

Range: Extended melee range to several kilometers with his trees and Sacred Weapons

A lot of junk

Ueki's Mash
Add a photo to this gallery

Ueki's Raika
Add a photo to this gallery

Ueki's Maoh
Add a photo to this gallery

Intelligence: While Ueki may not have common sense or book smarts (He lost his talent to study). He's proven to be a genius when it comes to battles. He will analyze his opponents' mannerisms/weaknesses and come up with a creative way to use it against them. He will also use the environment to his advantage if he has to. He is also a considerably fast learner, being able to copy Li Ho's secret of the Count of Monte Cristo after only having seen it once.

Weaknesses: Lost his talent to study. Suffers from motion sickness. The trash needs to be small enough to enclose in his hands in order to make trees. His Sacred Weapons have a lot of weight, which make him can't make sudden changes in his attack and can't use in midair (Anyway, this weakness is obliterated after he can utilize his inner power). His Sacred Weapons don't appropriate for use in close range.