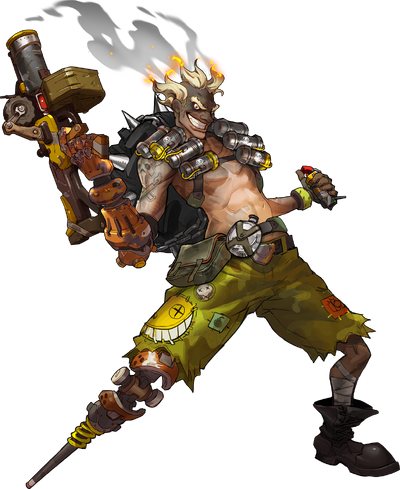 Junkrat is an explosives-obsessed freak who lives to cause chaos and destruction.

The attack on the Australian omnium's fusion core forever altered the landscape of the Outback. After the detonation, the area was transformed into a harsh, irradiated wasteland, littered with debris and the twisted fragments of the ruined facility, and unlivable to most.

But some survived. Calling themselves the Junkers, they scavenged the husk of the omnium and formed a lawless, cutthroat society in its shadow. Junkrat was one of them, eking out a living reclaiming metal and components from the ruins. Like many others, he was affected by the lingering radiation. This touch of madness made him ideal for handling dangerous explosives, a love which he turned into an obsession.

He came to notoriety when he discovered a precious secret in the bones of the omnium. Though few knew the nature of what he found, he was nonetheless pursued by bounty hunters, gangs, and opportunists wherever he went, until he made a deal with the Junker enforcer Roadhog, who grudgingly agreed to be his personal bodyguard in exchange for a fifty-fifty share of the spoils.

Now, with Roadhog in tow, Junkrat has left the Outback, and embarked upon an international crime spree leaving nothing but havoc and chaos in his wake.

Powers and Abilities: Superhuman Physical Characteristics, Weapon Mastery (Expert Marksman and Explosives user), Explosion Manipulation, Preparation, Resistance to Radiation Manipulation (Lived for years near a destroyed omnium that was giving off so much radiation that it turned most of the outback into a wasteland, and spent extensive time exploring the inside of said omnium)

Speed: Subsonic with Hypersonic reactions and combat speed (Can draw a bead on heroes as fast as Tracer and Soldier: 76)

Durability: Small Building level (Able to laugh off his own explosives and use them as a means of propulsion by detonating them at point-blank range. Can take a giant explosion point blank without any visible harm)

Stamina: High (Can easily take apart an entire horde of Omnics with ease while fighting alongside Roadhog)

Range: Dozens of meters, Hundreds of meters with Rip-Tire

Intelligence: Junkrat is a sociopath whose only goals are blowing up everything in his path and getting rid of "suits" (corporate executives) and Omnics. He is not the sharpest tool in the shed and often suffers from what appears to be an attention deficit disorder in addition to having a poor memory. Nevertheless, he is a highly capable combatant, quickly taking apart scores of Omnics with his explosives and bringing down an entire building along with his target after being double-crossed.

Weaknesses: Junkrat is reckless and insane due to the long-lasting effects of the omnium core reactor's meltdown, The RIP-tire can be shot down prematurely to disarm it, Junkrat is left vulnerable while steering the RIP-tire. Aiming is less effective when firing upwards, putting him at a disadvantage against airborne opponents.