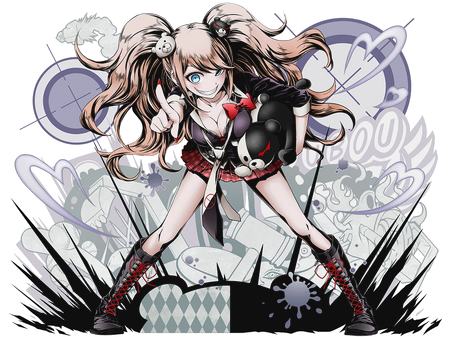 Junko Enoshima is a member of the 78th class of Hope's Peak Academy with the title Ultimate Fashionista for her impeccable fashion sense and ability to predict and set trends. In truth, her actual talent is Ultimate Analyst, allowing her to understand her surroundings and other people in an instant.

Bored with the mundanity of the society she knows inside out, she decides to experience something completely new by plunging the world into inescapable despair, causing the The Worst, Most Despair Inducing Incident in the History of Mankind as the leader of Ultimate Despair, being the true mastermind behind Monokuma and the events of the series.

Superhuman Physical Characteristics, Social Influencing (As the Ultimate Despair, she can easily drive other people to be suicidal, homicidal and "full of despair"), Mind Manipulation and Morality Manipulation despair video (Leaking it on the Internet drive a large amount of people to become anarchists that tore down any buildings, killed people with glee and replaced famous buildings with one's themed after Monokuma and Junko. Made class 77 willing to kill themselves to be possessed by her AI, as well as making them psychotic), Genius Intelligence, Memory Manipulation (With Yasuke Matsuda's research, she can erase memories, however, it is unknown if she can restore memories back ), Slight Toon Force (Survived most of her execution with no visible wounds before being squashed to death, and even then, the Ultimate Despair were able to retrieve Junko's body parts), Highly efficient in controlling Monokuma (When she's in control Monokumas can fight on par with people like Sakura and Akane and move faster than the natural eye and can possibly control even more Monokumas (or Monobeasts) at once as seen in Danganronpa IF and Danganronpa 2. Minimum number of Monokumas able to be controlled is shown to be over a hundred), Precognition and Information Analysis (As the Ultimate Analyst, Junko is able to read and analyze anything virtually instantaneously, being able to determine the personality, abilities, thoughts, and history of her foes with a mere glance and due to her analytical skills are so high that she can practically predict the future), Possible Acupuncture (Should be capable of utilizing needles as a weapon and use them in a brainwashing method as most of her brainwashing methods came from Yasuke Matsuda's research), limited Immortality (Type 6,her AI can potentially be uploaded into computers or even bodies, tough this requires very specific conditions that would require lenghty preparation)

All previous abilities, plus all abilities of a Monokuma.

All previous abilities, should have the Neo World Program specific Hajime's abilities, Has control of almost everything inside the Neo World Program (With the exception of the rules, she can't violate the rules and can't remove rules if the rules say so) and can add rules that needs to be absolutely followed and the one who violates the rules dies through frying the brain with intense trauma, Inorganic Physiology (Type 2; Is an artificial intelligence made of data), Mind Manipulation and a degree of Memory Manipulation (The door was able to tempt Class 77 to enter the door and suddenly made them forgot how they entered the room. The Neo World Program is also supposed to undo trauma sustained in the real world and can undo the brainwashing of people), Data Manipulation, Social Influencing

Attack Potency: Likely Small Building level (Should be comparable to Chiaki Nanami) | At least Building level+, likely Large Building level (Comparable to Sakura) | Unknown (Has nigh-absolute control of the program and everything within it, which includes a relatively large island, multiple distant islands, and outer space)

Speed: Normal Human with Superhuman reactions (Should be comparable to Yasuhiro Hagakure) | Supersonic (Can match Sakura Oogami in a fight) | Unknown

Durability: Large Building level (Took "The Ultimate Punishment" to kill, which involved feats such as being electrocuted with enough force to liquefy, being hit by speeding trucks while being burned alive, getting hit by countless baseballs at machine-gun fire rate, pounded by a bulldozer, sent into space and forcefully brought down all before dying under a crusher, any of which should have been more than enough to kill all members of the Danganronpa 1 cast, including Toko Fukawa) | At least Building level+, likely Large Building level (Also has near infinite replacements) | Unknown

Standard Equipment: None (Though sometimes seen using baseball bats or ice picks, meaning, she can use most weapons that she sees to benefit her)

Intelligence: Extraordinary Genius (Due to her feats down below). And her Ultimate Analyst talent makes it easy for her to predict events, such as the killing game in Danganronpa: Trigger Happy Havoc, even the Tragedy was beginning to bore her (as the chaotic event went just like she planned it to be), and her talent is the reason why she's called the Ultimate Fashionista, due to her ability to predict and set trends, she was able to understand and know the best current fashion sense.

Weaknesses: Makoto Naegi, as she can't read him properly due to his luck being weaker than Nagito Komaeda, it doesn't come out as much as Komaeda's luck, it always happen and most of those situations are "convenient" for his condition or simply situations that are in his favor and mostly what he wants to happen, unlike Naegi's luck only takes action "mostly" near-death situations and take note that Naegi is clueless on how his luck works or at least to manipulate his luck to some extent unlike Komaeda which might be also another factor on why she can't read his luck, and she hates anything to do with hope. Will flip when facing someone with Ultimate Hope (such as Makoto). Purposely leaves flaws in her plans, so there is a small chance her plan will fail and she herself will be consumed by despair.

Naughty Bear (Naughty Bear) Naughty Bear’s Profile (Junko got a Monokuma Bear, Base Junko was used, They started 20 meters from each other, Speed is equal)