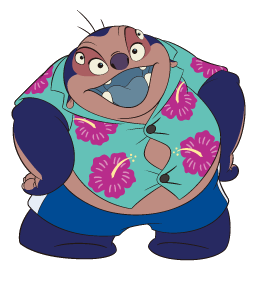 Jumba Jookiba graduated from Evil Genius University with Dr. Jacques von Hämsterviel, his lab partner. Shortly afterward, it is said the two opened up a joke shop together. When Jumba became the Lead Scientist of Galaxy Defense Industries, the two began work on Jumba's experiments. Jumba created the experiments and Hämsterviel funded them with his shady business deals. For those 25 years of partnership, however, Hämsterviel did nothing but (as put by Jumba) "cheat Jumba, embarrass Jumba, steal from Jumba, and finally, fink on Jumba to Galactic Federation" for his illegal genetic experimentation.

Thus, he stood before the Galactic Federation, having been accused of creating illegal genetic experiments. He was incarcerated because of his forbidden genetic experiments, but later released and sent off to Earth with Agent Pleakley in order to recapture one of his creations, Experiment 626. He was later quietly left on Earth (likely to avoid becoming a nuisance elsewhere in the galaxy) and has become a part of Lilo's extended family.

Attack Potency: Wall level physically (Threw a comb hard enough for it to punch through a door), higher with plasma blasters (The explosion of one obliterated Lilo's house) | Varies from Island level to Universe level+ (Created all of the experiments, including one designed to destroy the universe by warping space and time)

Speed: Subsonic reaction speed (Can react to attacks from Stitch)

Stamina: Above average (Can fight Stitch for an extended period of time)

Weaknesses: Forgetful at times and arrogant in regard to his intelligence

Key: Base | With preparation time

Dr. Doofenshmirtz (Phineas and Ferb) Doof's Profile (Both had a month of prep and speed was equalized)