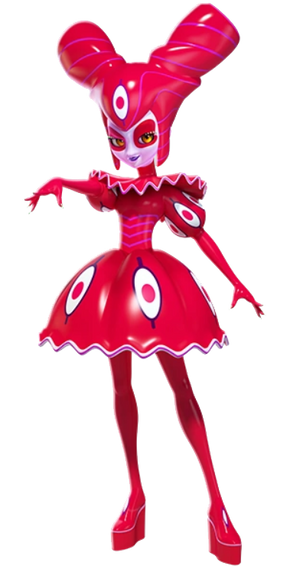 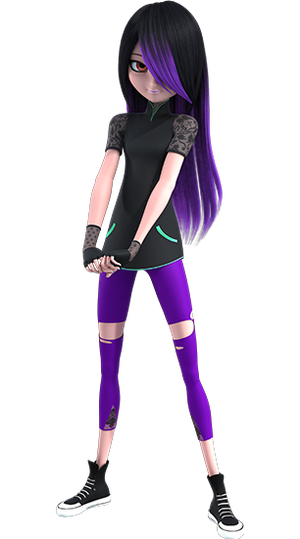 Juleka Couffaine is a student in Miss Bustier's class at Collège Françoise Dupont. She is also the younger sister of Luka Couffaine.

In "Reflekta", after being locked in the bathroom by Sabrina Raincomprix (under the orders from Chloé Bourgeois) to prevent Juleka from participating in the class photo, she is infected with an akuma by Hawk Moth and becomes Reflekta, a supervillain who turns people into copies of herself.

In "Reflekdoll", after Juleka misses the chance to photo shoot for Marinette's design, she is once again akumatized by Hawk Moth into Reflekta. along with being amokized by Mayura, her emotions forming a doll-themed sentimonster which enhances her powers.

In "Félix", after being fooled by Félix to think that Adrien didn't appreciate his friends, she is re-akumatized into Reflekta, and, along with Princess Fragrance and Lady Wifi, the three supervillains form The Punishers Trio, a group of supervillains who want to get revenge on Adrien, later Félix.

Superhuman Physical Characteristics, Acrobatics, Immortality (Type 6), Energy Projection, Transmutation, Power Nullification (Able to turn everyone touched by her beam into a copy of herself, taking away their powers in the process), Stealth Mastery, Vehicular Mastery; Duplication, Paralysis Inducement, Power Bestowal, Possession, Corruption and Mind Manipulation (If her Akuma isn’t purified after being defeated, it would start to multiply into many more Akumas and infect different persons, turning them into Reflektas that would remain immobile until Juleka gets Re-Akumatized)

Attack Potency: Wall level (Shouldn't be significantly weaker than Adrien) | Town level (Fought Ladybug over a year after she fought Stoneheart. Blocked several strikes from Ladybug with her beams), Large Town level with Reflekdoll | Large Town level (Comparable to the rest of the Gang of Secrets, fought Season 4 Cat Noir)

Intelligence: Unknown (Skilled at applying makeup, playing as a bassist and driving boats. As Reflekta, she was cunning enough to figure out Ladybug’s plan catch her)

Weaknesses: Her beams can be reflected on mirrors and become virtually useless against those who have already been affected by her powers. If the jewel in her bracelet it’s destroyed, she will lose her powers. If her akuma it’s purified after being defeated, she won’t be able to duplicate

Reflekta is able to shoot rays from the jewel she has on her right wrist, which transforms people into an identical physical copy of herself. Those transformed by her retain their normal voices and minds, but don't have her powers and lose their own abilities. They are immune to subsequent hits from her ray. Reflekta is implied to be able to reverse the transformations as well, as she says to Hawk Moth that she will take care of getting Cat Noir's ring after getting the Ladybug Miraculous, despite having transformed him.

Retrieved from "https://vsbattles.fandom.com/wiki/Juleka_Couffaine?oldid=7135914"
Community content is available under CC-BY-SA unless otherwise noted.