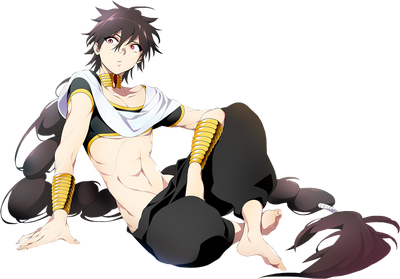 Judar (ジュダル, Judaru) is one of the four Magi in the current era and a Magician who specializes in Ice Magic. He is the Oracle of Al-Thamen and the Kou Empire.

Powers and Abilities: Superhuman Physical Characteristics, Extrasensory Perception (All magic can see rukh which exists in a dimension which normal people can't see), Soul Absorption (The rukh is the soul and having all of one's rukh absorbed will kill them. Arba, as a magi, could kill Dark Djinns by absorbing their rukh), Flight, Black and White Rukh Manipulation, Magoi Manipulation, Magic, Ice Manipulation, Water Manipulation, Wind Manipulation, Lightning Manipulation, Passive Borg (As a Magi, Rukh passively blocks attacks for him; borg are barriers which block attacks with evil intention. Even illusions and many other magic abilities), Power Nullification (via Isolation Barrier; via Absorption (Magi can absorb rukh from outside sources, even people. if a person has their rukh stolen they lack the ability to produce magoi and use magic), Can control and create Dark Djinns, Extrasensory Perception (Can perceive the Ruhk, which includes souls, can track metal vessels with his eyes), Gravity Manipulation, Absorption (Can absorb the Dark Ruhk produced by cursing one's fate to make himself stronger), Stealth Mastery (Can prevent the Ruhk from reacting to him and giving his position away), Curse Manipulation (Cursed Bellial with Black Ruhk), Non-Physical Interaction (Can interact with pure Rukh which is essentially souls), Information Manipulation (He can extract information from Rukh and absorb it to learn all the abilities of the person the Rukh belongs to), Fate Manipulation (Black Rukh can create futures that isn't possible within the great flow of White Rukh) and Acausality (Type 4; Is Fallen), Immortality (Type 4; When a Magi dies, their Rukh goes back to the Sacred Palace and then be resurrected once again into the world by Solomon. If a compatable clone of the Magi exist they can resurrected immediately), Space-Time Manipulation (He can use Transfer Magic which allows the user to manipulate space and time), Clairvoyance (He showed Hakuryu the story of Solomon and Il Ilah withlong ranged Clairvoyance Magic), Summoning (He can summon up to 72 Underground Cities ruled by Solomon's Djinn, they can then be conquered for Metal Vessals, Treasures or the Djinn's obedience itself), Telepathy (He can see and absorb the memories from Rukh to absorb the knowledge and magic of an entire magic civilisation), Resistance to Mind Manipulation and Soul Manipulation (due to falling into depravity, Judar is separated from the Great Flow, and was thus unaffected by Sacred Palace Sinbad rewriting the Ruhk which governs souls and fate and altered the minds of the planet's population).

Speed: FTL (Matched Aladdin and Alibaba) | FTL (Faster than before. Can keep up with Hakuryuu on multiple times)

Intelligence: Genius when it comes to magic

Weaknesses: Physically weak and has a cocky attitude.

Casually destroyed the outskirts of an island. (City level)

Borg: It is said that this is the proof that one can do magic. It is a defensive move that blocks out attacks with evil intent. It blocks out all physical attacks and magic to a certain degree.

Ice Magic: Judar is able to order water around, then freezes it into large Ice Shards.

Gravity Magic: Judar is able to use Gravity Magic where it appears like he is flying, by manipulating gravity. He is also able to use it to push people away with tremendous force.

Lightning Magic: Judar can turn his Magoi into Lightning Magic. During the summit in Sindria, he used Black Rukh to summon black lightning with his 'new' power.

Space–Time Magic: Judar was able to use space and time magic to transport himself to another place without the the divine protection of a Djinn although due to this new ability, it tires him out greatly.

Isolation Barrier (絶縁結界, Zetsuen Kekkai): Judar is able to create a large, black-colored "Isolation Barrier" which stops the flow of Magoi to inhibit casting spells inside the barrier. All spells cast before the barrier lose their power and any Magician or Djinn User becomes unable to use any Magic, including Judar himself.