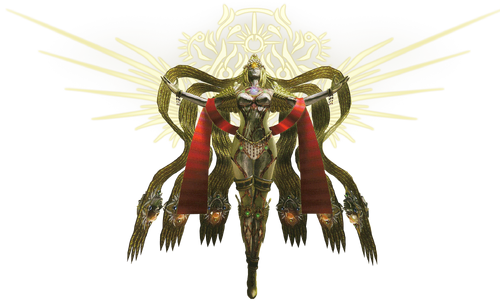 The true name of Jubileus, as recorded in myth, is actually constructed from unutterable syllables. This is because humans remain incapable of capturing her true glory, as she is the total embodiment of Divine Will. Humanity, bound to the physical world, was forced to depict and describe her in its own tongue. It is supposed that humanity selected the name Jubileus, taken from the word jubilee, meaning a celebration of rejoicing, in an attempt to turn Divine Will into worldly happiness via repeated recital of His name. As a result of the cataclysmic events of the ancient First Armageddon, of which she sat at the very apex, Jubileus was forced into dominion over the world of Paradiso, governor of the light amongst the Trinity of Realities, and put into an endless slumber. It was from this point that the forces of light and dark began their endless battle for hegemony. The resurrection of Jubileus would trigger a reunification of the Trinity of Realities, fulfilling the desires of not only the forces of light, but also a centuries-old prayer said by those seeking divine intervention.

Age: At least billions of years old (Older than the universe)

Attack Potency: Large Star level (Equal to Queen Sheba, who can shatter any planet in the solar system with a punch. Even in a weakened state Jubileus is vastly superior to the Four Cardinal Virtues) | Universe level (Comparable to Aesir. At her full strength she has the power to reunite the Trinity of Realities into a single universe where Paradiso reigns supreme)

Lifting Strength: Class P via powerscaling (Should be comparable to Aesir)

Durability: Large Star level (Can shrug off being punched by Queen Sheba hard enough to shatter any planet in the solar system like it was nothing, even after a long fight with Bayonetta) | Universe level (Sat at the very apex of the cataclysmic event that created the Trinity of Realities at the end of the First Armageddon)

Standard Equipment: The Right Eye of the World | None notable

Weaknesses: Can only be resurrected using the Eyes of the World, and is significantly weaker in this state | None notable