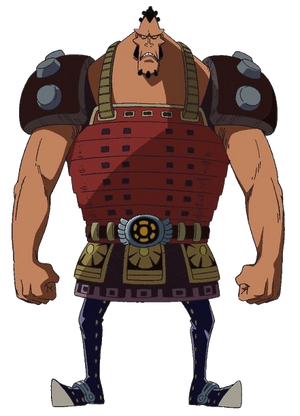 He is one of the strongest members of the Whitebeard Pirates, as shown by his position as the 3rd division commander. During the Marineford war, Jozu was powerful enough to fight on par against the Shichibukai and the Marine Admirals.

Jozu has outstanding brute strength, comparable to that of the Giant Squad Marines. He picked up and hurled an immense iceberg at a great distance at the giants protecting Marineford. The iceberg was so enormous that it appeared to be at least ten times as big as any of the giants. Thus, Jozu has demonstrated one of the greatest strength feats seen in the series. And, despite his massive body, his speed and reflexes are on par with his brute force; when he attacked Crocodile after the latter attempted to take Whitebeard's life, Crocodile commented on both the great speed and strength of the attack.

Jozu has eaten a currently unnamed Devil Fruit that allows him to transform, parts and most likely all of his body, into diamond. This power has earned him the nickname "Diamond Jozu". It is currently unknown if this is a Paramecia, like Supa Supa no Mi.

Jozu's powers give him the ability to greatly increase his offensive and defensive powers. His already strong physical attacks are enhanced by the density of his diamond body. His defenses seem to enhance exponentially, and he is able to block the strongest slash in the world from the world's greatest swordsman, Shichibukai Juracule Mihawk, with no visible damage to himself. However, when his whole body is not in full diamond form, he is still vulnerable to Aokiji's freezing abilities. Other than that, Jozu is weak against the standard Devil Fruit weaknesses.

Attack Potency: At least Mountain level+, possibly Large Mountain level (Capable of hurting the likes of Aokiji, and briefly engaged him in battle)

Speed: Likely Relativistic+ (Kept up with Aokiji in close-quarter-combat for an extended period of time)

Lifting Strength: Possibly Class T via powerscaling (Was able to casually pick up and throw an eight million+ ton iceberg hundreds of meters)

Stamina: High, was able to battle competitively against Aokiji

Intelligence: Adept and battle-hardened fighter with decades of combat experience in the grim and feral New World, given his position as the 3rd Division Commander of the Whitebeard Pirates he should possess great strategic and tactical ability as well as extensive knowledge when it comes to naval warfare 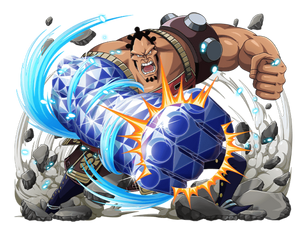 Kira Kira no Mi: Jozu ate a Paramecia-type Devil Fruit which lets him transform his body into diamond. His defense greatly increases and he's less likely to take damage. 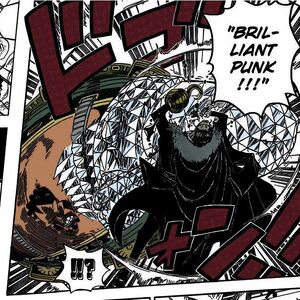