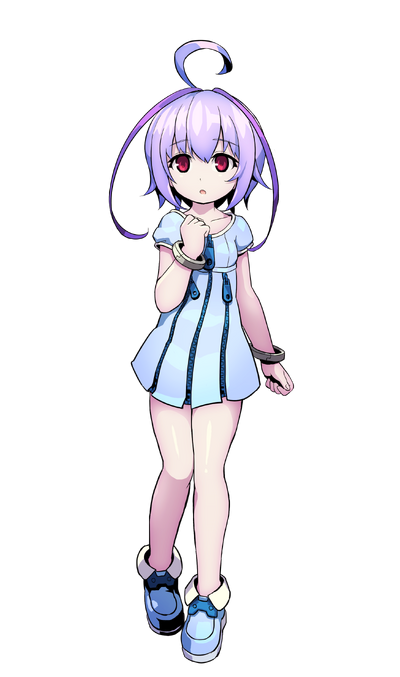 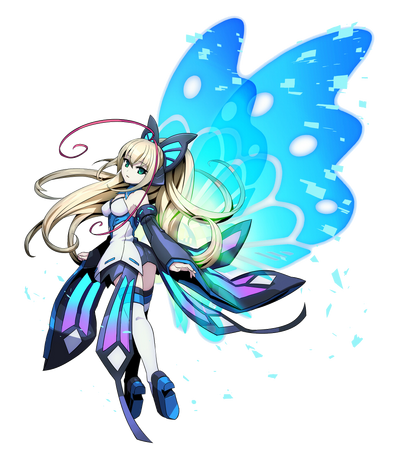 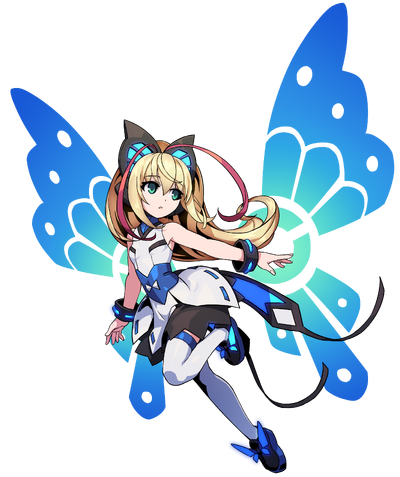 Joule was the first Synthetic Adept created by Sumeragi. She was used by Sumeragi for her Septima, The Muse, which allowed her to empower and locate Adepts. Sumeragi used this to capture Adepts. Eventually, she was rescued by Gunvolt.

Age: 13. Lumen is based off of what she pictures herself as 17

Powers and Abilities: Superhuman Physical Characteristics, Can summon a manifestation of what she truly wants to be called Lumen, Forcefield Creation (Lumen created a barrier around both Nova and Joule at various points), Attack Reflection (When Lumen's Barrier was around Nova, it had this property), Extrasensory Perception (Can detect Adepts), Statistics Amplification (A hundredfold, possibly more), Technology Manipulation (Used her Septima to make her character the maximum level and turn the RNG in her favor in a video game), Resurrection (Can bring Gunvolt back from the brink of death and from death outright), Mind Manipulation (Stated by several characters to have this. When she was being controlled, Sumeragi planned to use her to control every Adept in the country, though it's unknown exactly what percentage of the population is Adepts), Power Nullification (When Gunvolt gained her power himself, he was able to nullify Zonda's Paradise Lost), Limited Possession (Once killed, she can fuse her soul with Lumen and exist as a spirit, allowing her to inhabit somebody else's physical body, though she has absolutely no control over them), Causality Manipulation (After both her and Gunvolt were shot dead, she brought them both back, even overwriting herself being kidnapped so that Gunvolt could give her the jewels required for the good ending when this would be otherwise be impossible, as she was initially kidnapped by Merak before it was possible for Gunvolt to give her them), Clairvoyance (Both her and Lumen hinted at Gunvolt to collect something and bring it to them when they otherwise would have no way to know that something would need to be collected), Resistance to Body Puppetry (Resisted a machine made to control her Septima, albeit barely) and Absorption (While Nova and Zonda absorbed her without issue, it's implied that she resisted both's attempts to use her powers, though less for Zonda than Nova) | All aforementioned abilities as well as Non-Corporeal (Is a Spirit), Invisibility (Can't be seen by most people as a spirit), Size Manipulation (Commonly changes her size. Sometimes she's so small she's pratically invisible, while sometimes she's the size of a normal person), Immortality (Type 7), Possibly Regeneration (Mid-High. Seemingly regenerated from being turned into a mirror and shattered by Zonda's love cage, though she was weakened by this), Self-Sustinance (Types 1, 2 and 3 due to being a spirit) | All aforementioned abilities excluding Causality Manipulation, Clairvoyance and possibly some others. Statistics Amplification can now only go up to twelve times

Attack Potency: Likely Street level (Normal humans in the verse are this durable and should logically be able to damage one another) | Unknown (Unable to physically interact with the world around her as a spirit)

Speed: At least Normal Human with possibly Far Higher reactions (Even normal humans in the verse can react to attacks from an Adept with the same Septima as Viper. However, it's unknown if this Adept was as strong or as fast as Viper, as Septimas have been shown to vary in power, even for the same Septima. Sumeragi soliders, who are also considered normal humans are able to somewhat react to adepts at Gunvolt's speed)

Striking Strength: Likely Street Class (Though she dosn't fight physically and is far inferior to adepts that do, she should logically be comparable to normal humans in her verse) | Unknown

Durability: Likely Street level (Should be comparable to normal humans in her verse like Rei, who survived being knocked back by a small explosion into a bookshelf). At least Large Town level, possibly Small City level with barriers (Gunvolt was unable to damage her barriers in the slightest when Nova was using them, even when Joule was implied to be resisting Nova's control of her Septima. Mytyl with Joule's powers created a barrier that deflected Copen's shots in Gunvolt 2) | Unknown

Range: Standard Melee Range. Over 100 Kilometers with her Septima (Able to use her Anthem on Gunvolt on Earth even when she's in orbit)

Intelligence: At least Average. (Is considered a genuinely good songwriter, created a pendent out of Jewels with only basic Arts and Crafts knowledge)

Weaknesses: Not good at fighting. Is scared of ghosts. Can't control when Lumen appears. Dosn't know the full extent of her power and can't fully control it. If her soul is destroyed or she is weakened before she can use it, she can't use her Causality Manipulation | Same as before. Unable to physically interact with the world. Can lose her temper easily. Unless she can fuse her spirit with somebody else's body, she can't last long in this state

Key: Living (Gunvolt 1) | As a spirit/Fused with Lumen | Weakened (Gunvolt 2)

Note: Not to be confused with the unit of energy