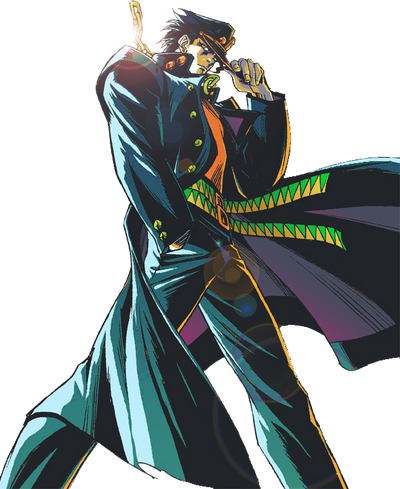 Jotaro Kujo is a 17-year-old Japanese high-schooler and the main protagonist of Stardust Crusaders, which was adapted into the Jojo's Bizarre Adventure OVA from 1993 and 2000 by Studio A.P.P.P.

The great-grandson of Jonathan Joestar and grandson of Joseph Joestar, Jotaro discovers he possesses the power of a Stand in the year 1988, caused by the return of the Joestar Family's century-old arch-nemesis, DIO. When his mother, Holly Kujo, becomes deathly ill due to the emergence of her own Stand, Jotaro travels with his grandfather and their allies to Egypt to kill DIO before his mother's time runs out and ends the Joestar curse once and for all.

Powers and Abilities: Superhuman Physical Characteristics. Star Platinum has Superhuman Physical Characteristics, Body Control (Can extend its middle and index fingers with Star Finger), Super Breath (Inhaled Justice's fog), Non-Corporeal, Non-Physical Interaction, Selective Intangibility, Invisibility, Enhanced Vision (Possesses incredible vision, allowing him to draw a fly in perfect detail by seeing it in the dark background of a low-resolution photo, to the point it's species could be identified. Can also use its vision like binoculars to survey an area of several kilometers), Semi-Flight (with Stand Leaps), Time Stop (Gained the power to stop time for five seconds in his final fight against DIO). Resistance to Time Stop (Could move within DIO's stopped time after becoming aware of his ability, gradually extending the duration of his movements within stopped time over the course of the fight)

Attack Potency: Unknown (Casually floored Hol Horse with one punch. Barely blocked a punch from DIO with his bare hands. Should be comparable to his durability), Unknown with Star Platinum (Can easily harm DIO, caving in his skull with one punch, who should scale to Tonpetty. Completely pulverized an entire boat, and inhaled Justice’s fog)

Speed: Superhuman with Massively FTL+ reactions (Can react to and dodge attacks from Stands), Massively FTL+ with Star Platinum (Comparable to Silver Chariot, who could outspeed and tag the Hanged Man while it was traveling at the speed of light)

Lifting Strength: Unknown, Class K with Star Platinum (Could lift and throw the spire of a tower with ease. Comparable to DIO, who could easily lift and throw cars and trucks, boats, and an oil tanker)

Durability: Unknown (Survived the explosion of an oil tanker before stopping time. Survived being kicked through neon signs and buildings by DIO himself. Survived hits from The World, however, it’s unknown if he actually withstood them himself or if he was being protected by Star Platinum), Unknown with Star Platinum (Easily withstood hits from Stands like The World)

Stamina: High. Able to fight for extensive periods of time even after receiving severe injuries like broken ribs and stab wounds.

Intelligence: Gifted. An exceptional battle tactitian who has outsmarted and defeated several Stand users far more experienced than himself.

Weaknesses: Star Platinum only has an effective range of ten meters